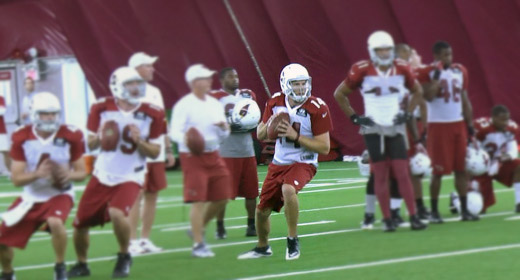 Of the Cardinals’ four quarterbacks, rookie Ryan Lindley has the most passing attempts and completions during the preseason.

Lindley will remain No. 1 in those categories, because neither Kevin Kolb nor John Skelton will be playing on Thursday night against the Denver Broncos at University of Phoenix Stadium.

However, Lindley will be playing, and starting as a matter of fact.

It will be just him and Richard Bartel behind center against Denver.

“I want to make sure I’m clear on this, Ryan Lindley’s not going to emerge from this game as our starter, no matter how he does,” Whisenhunt said.

Whisenhunt equated his decision along the lines of wanting to see how Lindley does with the Cardinals best players, and against the opposition’s best players.

“You’re excited about seeing them perform at a level in this game and that’s the thinking,” Whisenhunt said, also referring to running back William Powell and linebacker Reggie Walker, both of whom have also played at a high level in the preseason.

Whisenhunt is impressed with what Lindley has shown in his limited time on the field during the preseason.

“You can’t escape the fact that with very limited reps, he has performed well in the preseason,” Whisenhunt said.

Lindley said he wasn’t quite sure what the quarterback rotation was going to be for the finale, but now that all seems clear, he’s ready for his opportunity to start.

“For Kevin and John, there’s not a whole lot they’re gonna get out of this last game, so I’m just looking forward to taking my reps and getting in with these guys [first-team offense],” Lindley said.

Lindley says he’s looking forward to the challenge of getting the offense going in the early stages of the game.

After all, this is an offense that’s been outscored 36-10 in the first quarter of these preseason games, so to say it’s important to get on the board quickly – even against a Broncos team who may not put their starters out at all – is an understatement.

Kolb is just taking it all – Lindley starting and “The Decision” – in stride.

“I’m not bothered either way,” Kolb said. “Whatever his [coach Whisenhunt] decisions are when to say it, then we’ll roll with it.”

Skelton said it would’ve been nice to see another opposing defense, instead of the defense they see day-in-and-day-out, but he’s good with Whisenhunt’s decision to not play him.

As far as “The Decision” goes, Skelton will deal with it accordingly.

“Whenever he [coach Whisenhunt] does come out and make his decision, I’m sure Kevin and I will work forward from there,” Skelton said.

Lastly, Lindley knows he has a lot to learn being a rookie in the NFL, so he’s taking steps in order to continue in his progression.

“My biggest goal is to get better every day, every week, play better, be comfortable and be smooth,” Lindley said. “That’s the plan this week.”

Kolb and Skelton say they need to come out fast