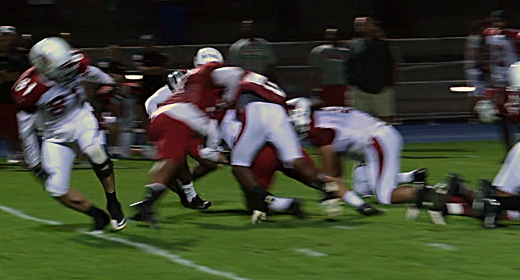 The Cardinals players are ready to bust someone in the mouth, preferably someone who’s not wearing the same uniform as them.

If you were at the night practice that the team held on Wednesday night, you could sense that the guys are tired of camp, and they’re ready to take on anybody.

They’ll get their chance on Sunday in Canton, Ohio at the Hall of Fame Game, as they take on Drew Brees and the New Orleans Saints.

The goal line “situation” was indeed the highlight of the night, as the offense and defense got a chance to beat each others brains in (within reason of course).

Tackle Jeremy Bridges enjoyed taking part in the practice, because he knows it was beneficial to himself and his teammates.

“We compete and we get the best out of each other,” Bridges said. “We kind of get on each other’s nerves, and it gets real chippy in this night practice.”

Bridges is on edge right about now, because as I said earlier, he’s ready for some real action.

“It’s getting to that point where I need to see another helmet besides one with a bird on it,” Bridges said.

“That’s part of the game,” Campbell said. “People are out here fighting for jobs, and we’re out here competing, and in competition, that’s what happens.”

Quarterback Kevin Kolb returned to the field  after suffering a thigh injury on Monday, and  according to him, “the quad held up fine.”

Kolb is looking forward to taking on the Saints, not only because of the “hoopla” surrounding the game, but because he’ll be able to “get back into a rhythm, taking live snaps in a game.”

Kolb’s mobility was of no concern to me from what I saw from him on Wednesday night. When the pocket crashed around him, Kolb rolled away from the heat and showed no ill effects from the injury.

We will see how many snaps he and John Skelton will get on Sunday, but having five preseason games does give the Cardinals a bit of an advantage over most teams, as they try to figure things out.

“We’ve got plenty of time to iron out all the kinks,” Kolb said. “We’ll take it slow and make sure we’re analyzing ourselves every time.”