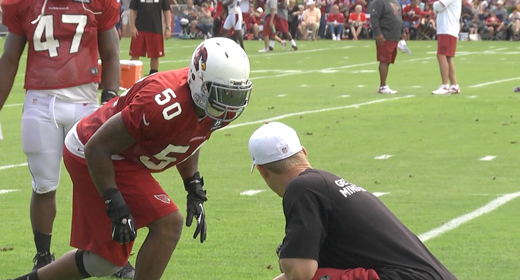 Arizona Cardinals Head Coach and Linebacker O’Brien Schofield met before the start of camp and there was one underlining word that arose as the theme to their meeting. That word is consistency.

Since being drafted by the Cardinals 130th overall in 2010, Schofield has had his highs and lows on the field for the team. Having played 26 games over the last two seasons in Arizona, Schofield has had 49 total tackles and 4.5 sacks.

But the Cardinals organization as well as Schofield himself wants more. And he is putting in the extra work both on the field and off to make the necessary steps to take his game to the next level.

“From a mental standpoint, just eliminating mistakes. That’s been a big focus of mine just making sure I am doing the right thing,” said Schofield at camp in Flagstaff. “Now I am very comfortable with the playbook and the coaches have trust in me.”

“He’s got the physical talent. But what he has to do is everyday he has to be the same guy,” Whisenhunt added about Schofield. “That means he needs to lineup right, he needs to have the right technique, and he has to not be focused on just getting sacks.”

Getting those sacks was a big part of Schofield’s game coming out of Madison, Wisconsin. In 44 games he recorded 17 sacks as a member of the Badgers. But at the pro level, making sure he does the necessary things to be a complete linebacker, rather than just a pass rusher is what lead him to higher success.

“Those will come for O’Brien,” Whisenhunt mentioned. “But if he does all of the other things he will be a very good outside linebacker for us.”

While making flashcards and doing all other things necessary to learn how he can have success in Ray Horton’s defense, Schofield ultimately wants to feel comfortable enough to go out and play the way he always has.

“Just going out and playing ball. Thats what I have done all my life is having fun and playing ball,” explained Schofield. “No thinking out there just reacting. I think during preseason I will be able to get my confidence up.”

Preseason starts fast for the Cardinals this year as they are taking part of the Hall of Fame game for the first time ever from Canton, Ohio against the New Orleans Saints. Going out and playing ball the way he always has but doing so consistently, will be at the forefront for both Schofield and his observing coaches.

Sports360AZ Retweeted · Brad Cesmat
@bradcesmat
Pac-12 power ratings: What happens when you have a collection of good teams? Big games, that’s what - https://t.co/ScFQluiOdN via @sports360az @wilnerhotline
View on Twitter
1
0