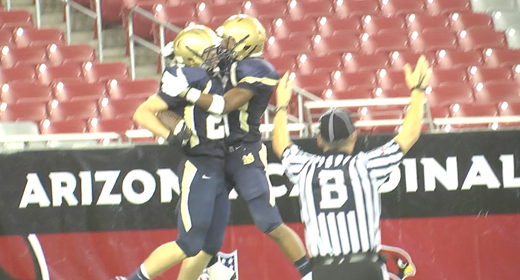 The last time the Desert Vista Thunder took the field for a game was on November 25, 2011 at University of Phoenix Stadium where they were crowned state champions.

Their first game since, to start the 2012 season, was back in Glendale on Saturday for the 7th annual Sollenberger Classic.

And once again, the Thunder walked off the field with a 20-10 win over Palo Verde High School from Las Vegas, Nevada.

“We love this field,” said Desert Vista senior defensive end and wide receiver Lorenzo Melvin. “We finish here. We won a state championship on this field. We’re undefeated on this field.”

And finish they did. After being down 10-7 in the first half, the Thunder came out in the third quarter and looked like a more confident and disciplined team. They took the lead on their first drive of the second half and never looked back.

“I am very pleased with the way these kids came together at halftime,” said Desert Vista Head Coach Dan Hinds. “They were very unpleased at halftime about what went down, they are not going to be very happy about the mistakes but we are going to take the win.”

It just so happens that Palo Verde has only lost four games in the last four years. All four happen to be at the hands of the team that represented Nevada in the Sollenberger Classic last year, Bishop Gorman. Bringing in a team that has been so dominant in the state of Nevada was a great opportunity for the Thunder.

“It was a good game to open up with because it’s going to give us an opportunity to get better,” said Hinds. “They basically exploited a lot of things that we need to work on…We play a couple of great teams on our schedule but I don’t know if we are going to see that much speed again.”

The Thunder attack on offense was led as always by their rushing attack. As a team they rushed for 137 yards on the ground. 60 of which came from Jarek Hilgers who also added a touchdown on the night.

But it was the defense led by stellar play from Melvin and fellow senior Zack Tamburo that kept the speedy Palo Verde Panthers scoreless in the second half.

The Thunder are defending state champs and have every intention of returning to Glendale again at the end of the season.

“The win takes us one step closer to a state championship,” said Lorenzo Melvin. “We got off to a slow start but we came together as a team. We made key mistakes at the beginning but we cleaned them up, that’s how we won this game.