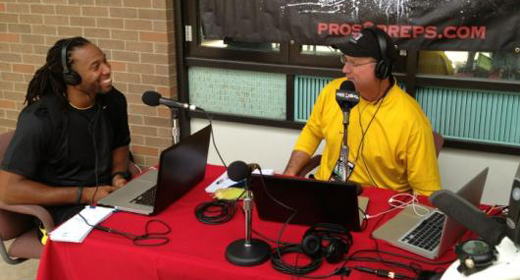 Cardinals wide receiver Larry Fitzgerald has done some amazing things both on and off the football field.

His hard work off the field hasn’t gone unnoticed, as Fitzgerald was named the recipient of the 14th annual Arthur S. Arkush Humanitarian Award, because of Fitzgerald’s contributions to his community and to his charities.

Here are just a few of the ways Fitzgerald is giving back:

The Larry Fitzgerald First Down Fund provides funding for activities for kids, not just during the summer, but throughout the entire year.

The programs are based in Arizona, Minneapolis and Chicago.

The Carol Fitzgerald Memorial Fund was created to celebrate the life of Fitzgerald’s late mother, who passed away from breast cancer in 2003. It supports the education of youth about HIV/AIDS, breast cancer and other causes that Fitzgerald’s mother held so close to her heart.

Fitzgerald and former teammate Anquan Boldin have traveled to Africa numerous times as representatives of the Starkey Hearing Foundation.

Both men traveled to Uganda shortly before training camp, to aid President Clinton and his daughter Chelsea in fitting and providing hearing aids for those who were in need.

Fitzgerald is also social media savvy. He uses both Facebook and Twitter to interact with his fans, and help others at the same time.

Fitzgerald started “Gimme 5 Fridays with Fitz,” where he asks his followers, better known as “Team Fitzgerald,” to text HAND to 50555. By doing that, $5 is given to Phoenix Children’s Hospital.

The award is named in honor of the founder of Pro Football Weekly, Arthur S. Arkush.