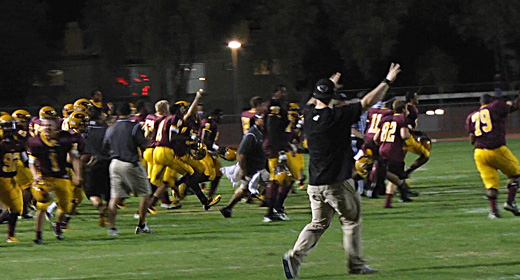 The Hamilton Huskies aren’t used to losing a game, let alone two games in a row. Unfortunately for them, the latter occurred on Friday night.

Mountain Pointe kicker Ryan Sheehan kicked a 22-yard field goal with 5.8 seconds left, to give the Pride a 17-14 victory over the Huskies.

Hamilton’s other loss to bookend the two came in last season’s Division I State Championship game.

“It’s special tonight baby,” wide receiver/cornerback Jalen Brown said. “It was all about the team coming back this season.”

“I’m ready for the season, it’s just one step in a long journey,” Brown said.

Running back Garette Craig’s 15-yard touchdown run got the scoring started for the Pride in the second quarter. The score was setup by a roughing penalty, which was called on Hamilton against Sheehan.

The Huskies would respond with 14 points of their own before the half.

Quarterback AJ Thigpen hooked up with wide receiver Tyler Eggers on a 37-yard touchdown play to even the score at 7 apiece.

Later in the quarter, running back Frankie Felix broke off a 15-yard touchdown run of his own to give Hamilton the 14-7 lead at halftime.

After a third quarter that saw a lot of defense and costly penalties, which kept both teams out of the end zone, the fourth quarter, belonged to the Pride.

Then came the drama at the end, and the heroics by Sheehan.

Mountain Pointe head coach Norris Vaughan was proud of the way his team stuck close to the Huskies, despite their lack of offense and ill-timed penalties.

“Our big test was, how [were] our kids going to do when things went bad,” Vaughan said. “It showed a lot of character, a lot of class right there.”

The Pride have a bye next week, while the Huskies are set to travel to Dublin, Ireland on Tuesday, to take part in the Global Ireland Football Tournament.