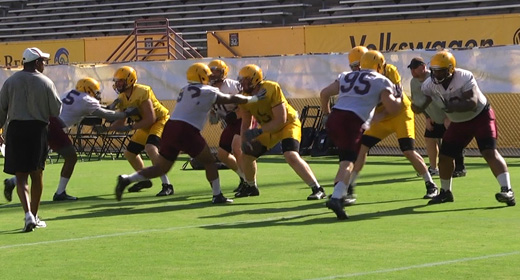 The Sun Devil football team has shed a lot of blood, sweat and tears lately, in order to prepare themselves for the regular season, and it’s almost here.

On Tuesday, head coach Todd Graham and his team held a “dress rehearsal” at Sun Devil Stadium, and according to Graham, one of the things they worked on were trick plays and how not to get beat on them.

“We had a lot of focus on that today, to make sure we’re not giving up anything cheap,” Graham said.

Graham said that on every Thursday, the team will practice inside the stadium, instead of the practice fields or at the Dickey Dome.

Graham thinks it can only benefit the players.

“The kids practice better, they have a better, intense focus on what they’re doing,” Graham said.

Graham said he wanted to challenge his players – most of whom are used to a specific practice routine – to step out of the norm and do things differently.

“Just being in here creates a different synergy, I like it,” Graham said.

Graham admitted that he and his coaching staff “over-scripted” things during the practice, like giving the defense over 100 plays to run.

You combine that with the heat, and that could’ve spelled disaster.

Quarterback Taylor Kelly will get his first collegiate start on Thursday night, and he’s all prepared for the spotlight.

“I’m ready, I’m really excited for Thursday,” Kelly said. “All we can do right now is get mentally prepared and stay focused.”

Kelly has seen improvements in his game ever since the Sun Devils started their organized practices.

Kelly attributes the changes to his work ethic over the spring and summer, which got him ready for the moment he’s about to experience on Thursday night.

“I feel confident in my vertical passing game, and my reads,” Kelly said. “I wouldn’t be here without the o-linemen.”

Kelly said he’s excited about the possibilities the Sun Devils have on offense, at both the running back and wideout positions.

“We’ll have a good running game,” Kelly said. “Our running backs and wideouts, I can’t wait to get the ball to them.”

Linebacker Brandon Magee is in his fifth season at Arizona State, and he’s looking for nothing less than an A+ performance from himself against the Lumberjacks.

“I expect an A+ performance every single game,” Magee said. “Mostly, I just need to get my confidence up and show that I’m healthy enough to come out here and compete for four quarters and that’s it.”

Magee knows that NAU will claw and fight until the end for a victory. He says the Sun Devils need to come out quickly and dictate the terms of this game, or things might get dicey.

“We have to show them that we’re here to stay,” Magee said. “You can’t let them get some confidence, because that could get scary.”

On a side note:

Graham is a big believer in rewarding players for their efforts, both on and off the field, which is what he did today when he announced that two of his players – linebackers Grandville Taylor and Brandon Johnson – were both awarded scholarships.

Both young men were walk-ons at Arizona State, and worked very hard to get where they are today, and it paid off for them in a big way.

“My message is “If you’re in this Valley, and you want to walk on and earn a scholarship, Arizona State’s the place to be,” Graham said.

Graham said that there was no way he would’ve given Taylor a scholarship back in the spring when he first took the head coaching job, but he saw Taylor’s work ethic and his attitude, which forced Graham to re-evaluate him.

“Steady” is the word Graham used to describe Johnson, and what he’s displayed since coming to Tempe, Ariz.

“Both [of] those guys are guys that’s going to help us win football games,” Graham said.