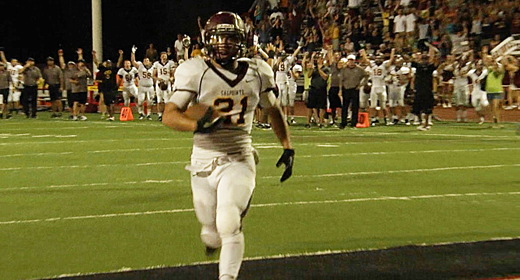 The hundreds and hundreds that make their way to Chaparral for a home football game on Fridays witnessed something that has not happened in Scottsdale for five years.

Salpointe Catholic traveled up from Tucson for week one of the high school season and knocked off the three-time defending champion Firebirds 27-20.

Big plays down the stretch for Salpointe on lef by quarterback Andy Cota, wide receiver Cameron Denson and running back Johnny Pena keyed the Lancers to victory. But is was outstanding play by the Lancers defense from start to finish that was crucial in the win. That defense was led by senior line backer, and SMU commit Carlos Carroll who we everywhere in the game.

For Chaparral, the start of the Dave Huffine era begins with a loss. But despite a rare loss, Huffine likes the direction of his team and the strides they made in the game.

“It’s a good Salpoite team, with all of the experience and all the talent, you’re not going to be able to lock them down forever,” mentioned Huffine after the game. “In the end I like the direction of this football team because we didn’t quit.”