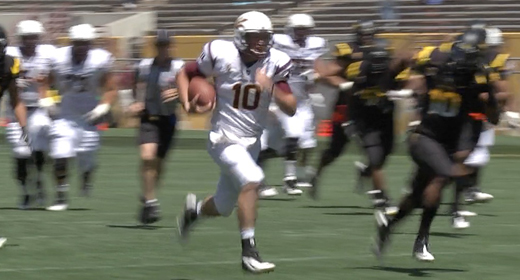 Okay, maybe not perfect but certainly much improved. The 6’1, 203-pounder from Eagle, Idaho appears to have pulled ahead of fellow sophomore Michael Bercovici and redshirt freshman Michael Eubank for the Sun Devils starting spot when they open the season on August 30th against Northern Arizona University in Tempe.

So where has he seen the most improvement?

“It’s been my downfield passing,” Kelly told Brad Cesmat Wednesday on ‘Big Guy on Sports.’ “[I’m] getting comfortable with that. Throughout the summer I worked very heavy on that. In practice so far I’ve felt a lot more comfortable in the pocket…just letting [the ball] go.”

Whoever breaks the huddle against NAU, the Sun Devil coaching staff is excited about their young receivers and deep, diverse group of running backs including senior All Pac-12 performer Cameron Marshall.

Recruited by former Sun Devil coach Dennis Erickson who had strong ties to the area, Kelly was the top-rated prospect in Idaho when he signed with ASU after being named the 2009-10 Gatorade Idaho Football Player of the Year.