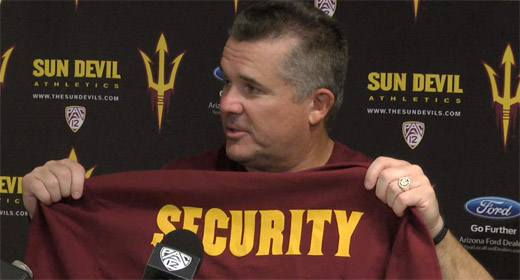 Arizona State faced adversity for the first time last week after a loss on the road to Missouri. How did they handle the adversity? By taking out their frustration from the loss on the Utah Utes.

The Sun Devils move to 3-1 and 1-0 in PAC-12 play on the season after blowing out Utah 37-7 on Saturday. They erupted for 21 points in the first quarter and never looked back.

“We came out to a great start,” mentioned ASU quarterback Taylor Kelly who was 19 of 26 for 326 yards and 3 touchdowns against Utah. “The defense did a great job of stopping them and once we got the ball, we just decided to come out strong, we got in to a good rhythm quick so we came after them.”

“That was a good football team today and we totally dominated them,” added ASU head coach Todd Graham. “Good players win games…I’m really proud of our players, I’m proud of how they executed.”

Utah was statistically the better defense coming into the game, but ASU’s defense was the dominant one. Senior linebacker Brandon Magee knew his defense had that performance in them.

“We watched film, we studied, I’m surprised we gave up that touchdown but that’s what happens when you play good teams,” said Magee who had 10 tackles, a forced fumble and a fumble recovery in the win. “We felt like we should shut them out. We talked about it in the meetings and um, yep!”

Offensively, ASU received great production from their wide receiving core. A group on the team that has received some scrutiny after the first three games, especially from their head coach. But Rashad Ross, Jamal Miles and Kevin Ozier came to play combining for 219 yards and a touchdown on the night.

“We took it as a challenge last week,” mentioned ASU wide receiver Rashad Ross who had five catches for 87 yards and a touchdown on the night. “This week we came in as a group and focused more, practiced harder. So I would say that’s what made the difference to why we played better this week than last week as a receiving unit.”

The biggest thing coach Graham and his players were proud of was their ball security. They won the turnover battle 3-0 and as a reward, Graham gave his team a shirt that says “security” on the back as a prize.

It seems as if a new player every week shines for the Sun Devils. This week, it was corner back and junior college transfer from Arizona Western Chris Young. Lining up in the spur position for the ASU secondary he had eight tackles, a forced fumble and 1.5 sacks against the Utes. Graham said after the game that Young is the type of player you design plays for.

“I’ve never had anyone fit in any better,” explained Graham. “I love designing stuff for him. I love getting him around the ball. When I recruited him I knew he was special. I’ve had some good ones but I don’t know if I’ve had anyone better than him.”

“My last junior college ran a very similar defense,” added Young. “What I was doing over there was very similar to what I’m doing now. It really felt good coming in and I’ve adjusted well.”

ASU continued their dominance at home this season as they’ve out-scored opponents 145-27 at Sun Devil Stadium. But the Sun Devils will look to have that continue on the road next week as they travel to Berkley to face the 1-3 California Golden Bears next Saturday.