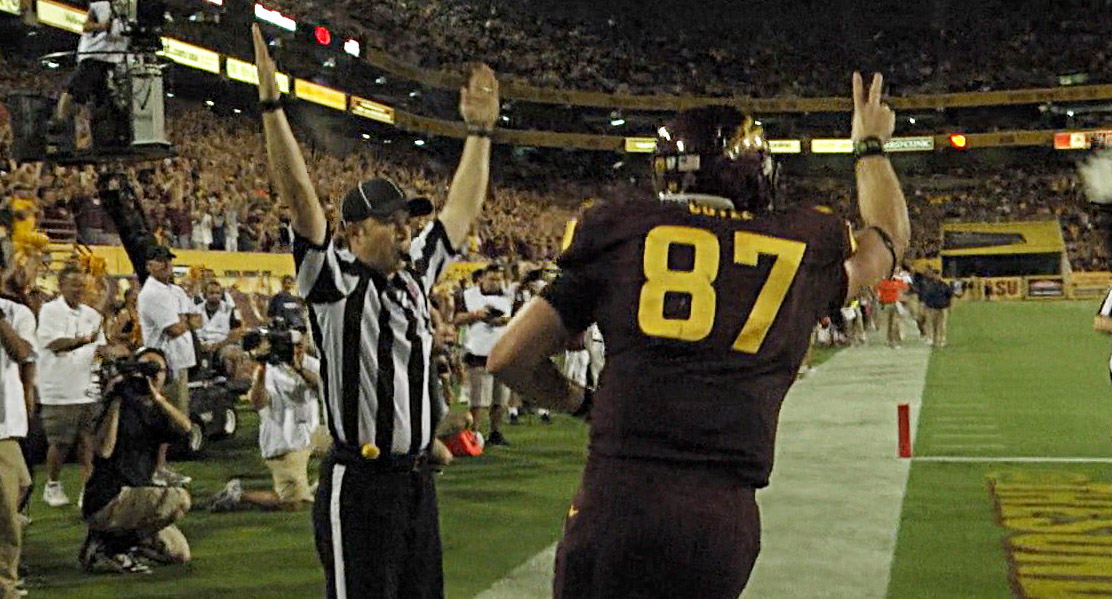 The Sun Devils picked up right where they left off in week two of the season as the defeated the Illinois Fighting Illini 49-14 on Saturday night.

The Devils were relentless on offense right from the start as the Devils quarterback duo of Taylor Kelly and Michael Eubank combined completed 15 consecutive passes. The offense finished with 510 total yards on night.

“We were putting up big numbers in the spring and the summer,” said ASU quarterback Taylor Kelly. “We have an attack offense and it’s very dangerous and it’s hard to stop.”

The star of the game was ASU tight end Chris Coyle, who had ten catches for 131 yards and two touchdowns. He was the number one target for both Kelly and Eubank.

“It was a great night tonight,” explained Coyle. “I just tried to catch everything they threw my way…I am just trying to make plays for the Sun Devils and I was happy to get into the end zone the couple of times that I did.”

After the week one win over NAU, Todd Graham was disappointed in the tempo of his teams offense. He said it almost seemed like they were being courteous to the defense and allowing them to get set. So how did they fare in week two?

“It was fast tonight. It’s closer now than it was a week ago,” explained ASU head coach Todd Graham. “I want to put a product out there that is exciting for our fans to watch. I think it’s exciting to watch but it’s only just the beginning.”

While the offense has received a lot of the attention due to the exciting style of play, the ASU defense turned in their second straight impressive performance as well. They forced three interceptions on the night. Two of which came from freshman Carlos Mendoza, who got extra playing time with Brandon Magee not playing due to an injury.

Maybe the best note of all as a result of the Devils 2-0 start has been the drastic decline in penalties from last season under Dennis Erickson.

“I sit down and look and the only one that had a penalty tonight was me,” Graham mentioned. “To go two games with none on defense and on special teams, I’m really proud of our guys.”

The Sun Devils as a result of Saturday’s win, remain undefeated against Big Ten teams at home in their history.