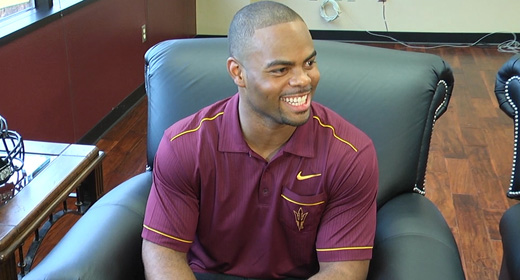 So far, at least, that’s the case for Todd Graham and the Arizona State football team who started fast and coasted to easy wins over NAU and Illinois in Tempe to start the season.

Saturday the Devils will get their first fast of the road traveling to Columbia, Missouri to face an angry group of Tigers still smarting from a home loss to Georgia last weekend.

ASU (2-0) enters the contest confident after dominating the Big 10 Fighting Illini both offensively and defensively. Graham has his players believing they not only they have a chance to win, they’re expecting to win.

“The word is we’re ready to get over there and get this ‘w’, outspoken starting linebacker Brandon Magee said on ‘Big Guy on Sports’ Thursday. “It’s going to be an exciting game. First road game of the year and it’s a big one.”

Magee, one of the more outspoken senior leaders, says he and his teammates shouldn’t be intimidated by the SEC-newcomer Mizzou (1-1) or the near sellout crowd which is expected Saturday evening.

“That’s exciting,” he explained. “With me, all the [trash-talking and rowdiness] just gets me hyped up. I don’t say nothin’ to the fans. I just listen to ’em and then I go onto the field. I love playing away games.”

He may be ready, but no one else is sure what to expect from the Devils who enter the contest a touchdown underdog. Graham stressed this week the importance of being mentally ready to play and staying focused for all four quarters. He believes winning on the road in college football is one of the most difficult things to do in sports.

Besides Missouri’s second half collapse against UGA, Gary Pinkel’s team likely has last year’s 37-30 loss to ASU in Tempe on their mind, as well. Earlier this week on ‘Big Guy on Sports’ Pinkel downplayed the revenge factor and said he and his coaches have their hands full trying to figure out how to slow down new starting quarterback Taylor Kelly and Devils high-powered offense.

Fortunately for Pinkel, he has a pretty good signal-caller himself in James Franklin who can beat you with his arm or his legs in their spread offense which thrives on mis-matches out of their empty backfield sets.

Magee said the Sun Devils must play sound technique football and tackle well to cutdown on big plays. Last year Franklin was able to expose the ASU secondary by throwing over the top.