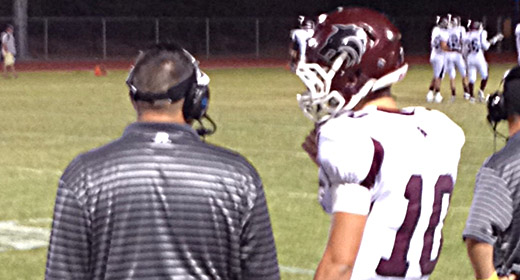 After watching Friday’s 28-37, 371-yard, six touchdown performance in a comeback win over rival Notre Dame Prep it’s easy to see why the 6’2, 200-pound junior is one of the fastest rising players in not only Arizona, but along the west coast.

Not bad for a kid who has played just over a dozen varsity games.

Standing on the sidelines during the Wolves dramatic comeback win where Allen threw the go-ahead touchdown with 12 seconds left, it’s easy to see why he won the Golden Gun Accuracy Award at the prestigious Elite 11 Quarterback Camp in Dallas last summer. He certainly has the arm strength to make all the throws at the next level.

Jewel says he has some of the same skill set as former Notre Dame Prep standout Sean Renfree who’s now starting at Duke .

Kyle’s father Mike said he has been getting a steady stream of letters from Alabama, Michigan, Michigan State, and several other top programs. Mike also said his son, a 3.9 student, plans to graduate in December of 2013 so he can be enrolled and on campus for the school he signs with during their spring workouts.

That list is sure to grow after more performances like he had Friday night against NDP at Scottsdale Community College.