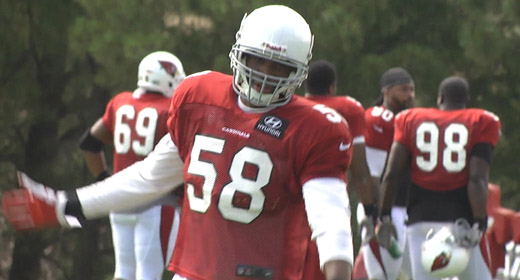 Cardinals linebacker Daryl Washington has taken this organization and the NFL by storm, as he heads into his third season in Arizona.

What more could he do in a 16-game season?

Washington joined the Ravens’ Terrell Suggs, the Patriots’ Rob Ninkovich, the Packers’ Clay Matthews and the Jets’ David Harris as the only players to have at least five sacks and two interceptions in 2011.

For all of Washington’s hard work and his tireless efforts, the team decided to reward him with a new six-year contract, which will keep him a Cardinal through the end of the 2017 season.

As with the locking down of defensive end Calais Campbell back in May, head coach Ken Whisenhunt talked about the importance of keeping Washington in-house.

“It’s great when you have a young guy that’s made the strides that Daryl has,” Whisenhunt said. “We thought highly of them before we ever even drafted him and he certainly hasn’t let us down.”

Washington said he wanted to be a Cardinal long term before the deal was even done, so for it to be completed and out of the way makes it easy for him to focus on playing football.

“It just shows that they [the Cardinals] believe in me, they believe in my talent,” Washington said. “It shows what kind of person I am, what kind of character I have, and I’m just excited right now.”

Washington feels that he’s ready to step it up even more this coming season and become even more of a leader on the defense.

“Definitely,” Washington said. “It’s a whole new year for me, and I’m expecting big things out of myself as the organization is, so I’m definitely looking to lead more and continue that on with the rest of my years here.”

Roberts says it’s good to see the Cardinals take stock in the talent they have, and take care of them when they perform well.

“It’s a good look, knowing my situation will be coming up soon,” Roberts said. “I definitely don’t worry about that because I know it’s gonna handle itself.”