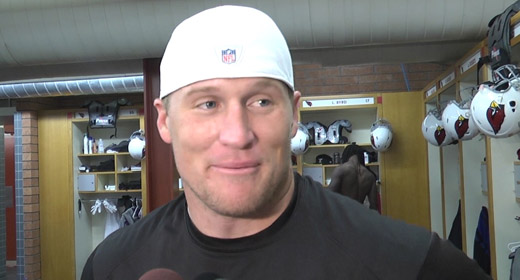 Former Browns and Ravens owner Art Modell passed away on Thursday morning at the age of 87.

Modell will forever have a place in the hearts of Browns fans, as the owner who moved their beloved team from Cleveland, Ohio, to Baltimore, Md., in 1996, primarily because he felt Cleveland Municipal Stadium wasn’t a viable stadium for his team to play in, plus Modell was losing money by the truckload, so in his mind, something had to be done.

Four years after moving to Baltimore, the Ravens would win Super Bowl XXXV. The following season the team would draft tight end Todd Heap, and Heap would spend his first decade in the league in Baltimore, before moving on to the Cardinals.

Heap vividly remembered some good times he and Modell had together in Baltimore.

“I’ll fondly remember, after almost every game, going up and just visiting with him [Modell],” Heap said. “He always had my kids on his lap.”

“It was kind of like a constant deal weekly,” Heap said.

Heap has nothing but respect for Modell and the Ravens franchise that Modell fought so hard to bring to Maryland.

“[He] definitely will be missed.”