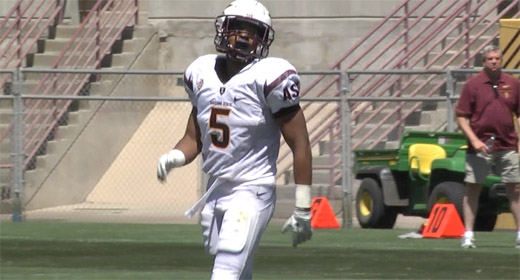 People know Deantre Lewis’s story and the up’s and down’s he has had since first putting on a Sun Devil uniform. His breakout performances running the football to getting shot in the off-season sidelining him for the entire 2011 season.

Despite being one of the most athletic players on the current Sun Devils roster, Lewis has not seen the field a whole lot on offense with Cameron Marshall, D.J. Foster and Marion Grice ahead of him.

The common trend these days when a player like Lewis doesn’t see the field is to transfer. However Lewis is doing the opposite for ASU. Head Coach Todd Graham approached Lewis about taking some reps on the defensive side of the ball and Lewis’ response is being willing to do whatever it takes to help the team win.

“Deantre came to me and said coach if you need me to help you I’ll help you,” said Graham. “So were going to look and see if can help us there.”

“He (Graham) asked me if that is something I really want to do because he wan’t sure if I wanted to but I told him yeah,” added Deantre Lewis.

The lack of depth in the secondary has been one of Graham’s biggest concerns here early in the season. Graham got the idea to play Lewis at defensive back from his play so far this season on special teams. The plan will be to have Lewis play a spur or bandit position in the Sun Devils dime packages on third downs.

“I just feel like I got a lot of anger built up in me and I can take it out on opponents,” Lewis mentioned. “I feel like it’s a good change for me.”

When you have been playing offense for so long especially at this level, switching to defense could be a very difficult transition. However Lewis is confident in his abilities so that the switch is a smooth transition.

“I feel like that is my god given talent too to play DB,” explained Lewis. “And I feel like I am going to use it.”

Graham said that offensive coordinator Mike Norvell is not a fan of this move but it is a move that could impact the team positively down the line. With the Sun Devils going up against a very fast and athletic Missouri offense on Saturday, adding someone like Lewis could prove to be very beneficial.

“We might look at it and have nothing come of it,” explained Graham. “But Deantre was more than willing as a team guy to say coach hey whatever I can do, I’ll do it to help out team.”

Deantre Lewis and the Sun Devils leave for Columbia, Missouri on Friday before their matchup with the Tigers on Saturday.

Sports360AZ Retweeted · Brad Cesmat
@bradcesmat
Pac-12 power ratings: What happens when you have a collection of good teams? Big games, that’s what - https://t.co/ScFQluiOdN via @sports360az @wilnerhotline
View on Twitter
1
0
Go to mobile version