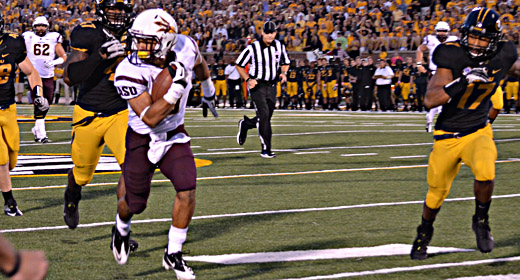 Arizona State’s rally late in the fourth quarter fell short as they lost their first game of the season 24-20.

Arizona State dug themselves a 17 point hole at Missouri and it was too much to overcome, as the Sun Devils lose their first game under Head Coach Todd Graham, on Saturday night.

Missouri starting quarterback James Franklin was held out of the game with a shoulder injury, but it didn’t matter as redshirt freshman Corbin Berkstresser led the Tigers offense.

ASU cut a 24-7 gap down to 24-20 with 11-minuets to go in the fourth quarter after two Marion Grice touchdown runs.

A fumbled snap on an extra point prevented them from being down just three in the closing minuets of the game.

Earlier in the contest Jamal Miles fumbled a punt and punter Josh Hubner dropped a snap deep in his own territory.

It’s only fitting that the lights went out in a portion of the stadium at Missouri in the first half as Arizona State University played like they were in the dark for most of the first 30 minutes but scored a late second quarter touchdown and trail only 17-7 at the half.

Missouri led at the end of the first quarter 10-0.

Kelly led the Sun Devils in rushing in the opening frame with 33 yards but wasn’t helped by his teammates, Cameron Marshall was held to -1 yards.

Mizzou capitalized on a Miles’ fumbled punt midway through the first quarter to push the count to 10-0 Tigers, it would remain that way through the end of the quarter.

In the second quarter down 10-0, with Missouri driving for an apparent score LB Brandon McGee made a terrific read and came up with a touchdown saving interception off of Tiger QB Corbin Berkstresser.

Missouri held a 17-0 lead in the second when the Sun Devils would get on the board with a nice mixture of playing calling. DJ Foster would take a screen pass and maneuver 34 yards into the end zone making it 17-7 Tigers at the half.

With the loss, ASU falls to 2-1 on the season and will open Pac-12 Conference play next Saturday night at home against Utah.