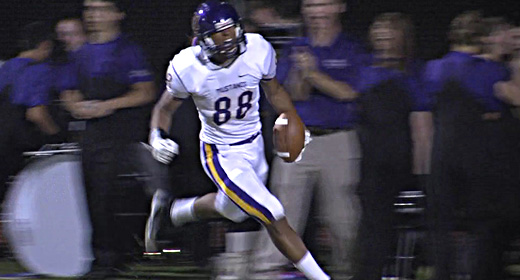 If you’re a wide receiver in high school, and you have five catches in a game and they’re all for touchdowns, chances are that head coaches at the next level will have you on their radar immediately.

Which is the case with Sunrise Mountain wide receiver Elroy Masters, who hauled in five catches – all for touchdowns – against Copper Canyon on Sept. 14.

In addition to the five touchdowns in the game, Masters had 254 yards receiving, including a 78-yard touchdown catch from quarterback Neiman Sneed, as the Mustangs rolled big 76-13.

His play this season has sent ripples through the ranks of college football, and has at least 10 schools – soon to be a lot more as his play increases – seriously interested in No. 88.

According to head coach James Carter, San Jose State and Wyoming – who have made formal offers to Masters – will have scouts at the Mustangs game on Friday night, as they host Peoria.

Carter says he stays busy fielding calls and sending out emails regarding Masters.

He says this is just the beginning for this young man.

“I think after a couple more games here, I think it’s going to be unlimited, he’ll get to pick where he wants to go,” Carter said.

Masters is quite the physical specimen. At 6’3″ and 205 pounds, Masters poses quite a problem for opposing head coaches and defensive coordinators, which naturally pleases Carter.

“It just makes defenses have to plan for him,” Carter said. “What also helps from last year, keying [running back] Elijah [Castro], which opens up Elroy, so it’s kind of a two-for-one deal, they’re going to stop one and we’re gonna open up the other.”

In order to be considered an elite player at any level of any sport, you have to work as hard off the field as you do on the field, which Masters says he’s been doing since day one. He says he’s been working to up his training in order to get even better.

Masters says he watches college football on Saturdays, and realizes how fast and physical the players are, which has made him take stock in himself and make note of the things in his game that he needs to polish even more this season before he takes the next step to college.

“I would just say details on routes and just continue to work on speed,” Masters said.

For an athlete, it’s important to be well-rounded. In other words, it’s not all about sports all the time. You have to be able to offer more to your community than just that.

Carter – in his third season at the helm – has seen Masters grow both as a player, and more importantly, as a person since he’s been head coach.

“He’s a great citizen,” Carter said. “A 4.0 grade point average, and the type of kid you’d let your daughter date.”

Castro says Masters is like a father figure for him in a lot of ways.

“He’s always there saying, ‘Hey, don’t go to parties, don’t get in trouble, if you guys want, you can come over my house and play Xbox and have pizza,'” Castro said.

Castro says Masters has “a great future ahead of him,” which is why he decides to steer away from anything that could jeopardize the things that are headed his way.

This season, Masters says he has a lot to prove after missing a significant amount of playing time last season due to injury.

“I have a goal to prove and show everyone that I’m here to be the best receiver in the state,” Masters said. “I have a lot of motivation for me and towards the team and winning state.”

I rewatched the game to prep for the series we're doing on @Sports360AZ and our sign-making peaked in '01:

The GREG Counsell fan club and I'm fairly certain that is a blown up picture of the Nokia Snake game. https://t.co/G3oHvx69b8
View on Twitter