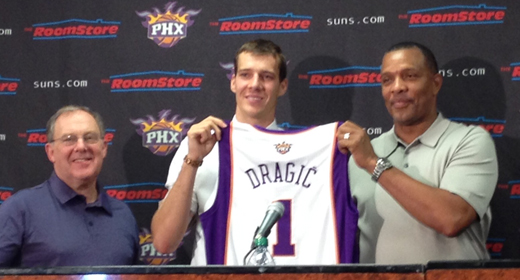 Goran Dragic’s first stint with the Phoenix Suns was a roller coaster ride to say the least.

Whether is was his 23-point fourth quarter against the Spurs in the playoffs or him coming off a pick-and-roll and spotting up for a three but hitting nothing but backboard, Suns fans always seemed to be okay with the growing pains that came with their future point guard.

Now Dragic is back and expected to be the quarterback of this new look Suns team taking on a new era. It reminds me of a very similar scenario Suns fans saw with a once drafted player returning to the Suns coming from a team in Texas to ignite a new era.

No, I do not expect Goran Dragic to come in this season and become the Steve Nash of 2004 and in his first season back with the team, lead the Suns to a western conference finals. That team had a lot more talent, a lot more chemistry going in and quite frankly, Dragic is just not Steve Nash.

The only comparison I am drawing is Dragic has an opportunity to now build his legacy in Phoenix Suns history upon returning to the team as the man getting the franchise through a difficult time. Just like Steve Nash did. He is coming in at a time where the franchise needs to turn around and at a time where the fan base is looking for something or someone to gain promise for the future.

The Suns success in the coming years will not be hinged on the play of Marcin Gortat or Luis Scola. Both have proven they can put up good numbers on a team that still struggles to win. The same goes for Jared Dudley and Channing Frye.

Furthermore, success could come from players like Michael Beasley and Wes Johnson exceeding expectations but both are yet to prove that they can be consistent. And Kendall Marshall will need time to develop.

The way I see it, any success moving forward hinges on how Goran Dragic takes the steering wheel with this Suns team he is going to be given the keys too. Dragic will need to come in and will need to lead, he will need to be a scorer when they need points and he will need to find guys like Scola, Dudley, Gortat, or Beasley when they have the hot hand. Above all, he will need to facilitate. Something he struggled with at times his first time around in Phoenix.

If Dragic can take on this role and thrive, the Suns as a team will benefit and he will be known as the player that lead the Suns out of some very frustrating times. Success in Phoenix is not something this fan base forgets and Dragic has the make-up to possibly be the next in line.

If the Suns franchise didn’t believe it too, he wouldn’t be the one throwing out the first pitch from Chase Field before the Diamondbacks and Padres game on Wednesday.