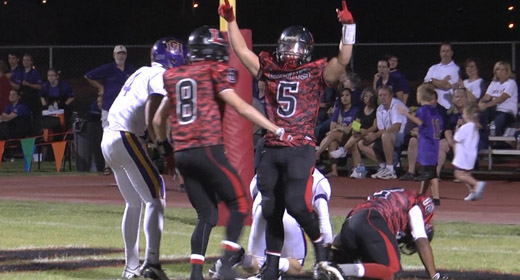 Sunrise Mountain and Liberty both came into Friday night’s action undefeated at 4-0.

Ironically, the Lions were trying to up their record against the Mustangs to the same 4-0 mark, which they did in big fashion, 56-21.

Both teams came into the game averaging well over 50 points per game, but Liberty would be the only team to continue that trend.

That would be a precursor for things to come.

It seemed like the Mustangs would have enough firepower to hang with Liberty on the night, especially after quarterback Dylan Touvell hit wide receiver Elroy Masters on a 64-yard touchdown pass, which tied the game at 7 apiece.

However, penalties and turnovers would kill many drives by Sunrise Mountain, even though they did manage to stay even with them at 21 at the halftime break.

Running back Corey Brown’s goal line scamper just before the half would be the last time the Mustangs would light up the scoreboard in their favor, because Liberty decided to shut it all down after the intermission.

The rout only took four minutes to commence once the second half started, as Rogers hooked up with his favorite receiver on the night, Caleb Robinson, on a 50-yard bomb to make it 28-21.

Running back Kyle Harms would add to the scoring with a 72-yard touchdown run of his own, and the rest is history.

Head coach Dan Filleman says this is the exact position he wants his team to be in – undefeated and “making a run.”

“This is another step for us, we don’t want to take anything for granted,” Filleman said. “Hats off to the defense, [the] offense we just fed off of it and did our part too.”

Rogers threw his first interception of the season on Friday night, but he didn’t let that affect him or how he ran the offense.

Rogers is already moving onto their next opponent – a road trip to Copper Canyon next Friday night.

“We’re just gonna focus on next week and get the ‘W’,” Rogers said.

Harms noticed how the offensive line seemed to evolve as the game went on, which eventually allowed him to break free for his long touchdown run.

Robinson, like Rogers, has already turned his attention to the future, and is already thinking about hoisting some hardware at the end of the season.

“This is not a rivalry for us, it’s for them [Sunrise Mountain], because we beat them four times in a row,” Robinson said. “We’re looking for better things, like a state championship, that’s what we want.”

Class of 2015 Rounding into Shape Before Signing Day