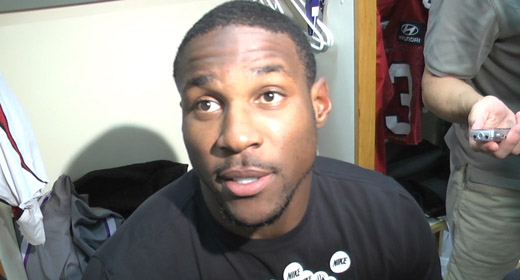 The Cardinals are used to playing tight games and coming out on top in the end, which they did on Sunday after beating the Patriots 20-18 at Gillette Stadium.

With the win, Arizona stays as hot as the weather. They’ve won nine of their last 11 games.

Alongside those numbers come these: of their last 11 wins dating back to last season, all have been decided by seven points or less, which cornerback Patrick Peterson is quite used to by now.

“I’m definitely used to it,” Peterson said. “This is what playing in the NFL is all about, digging down deep when the game is on the line [and ] pulling out a victory.”

Being able to go into Gillette Stadium and beat the Patriots – a team who never lost a home opener there since the building opened – is a huge accomplishment for the team, according to head coach Ken Whisenhunt.

“I think it helps foster the belief in team, that we go in and we work together on all three sides of the ball and make plays,” Whisenhunt said.

Speaking of making plays, the Cardinals defense and special teams have been known for doing just that over the past few years.

Linebacker Quentin Groves made it 15 on Sunday with his first career blocked punt on Patriots punter Zoltan Mesko in the third quarter.

Groves’ play was directly responsible for the Cardinals scoring their first touchdown of the game three plays later.

Groves said earlier in the week he spent time with special teams coach Kevin Spencer, breaking down special teams film on the Patriots, and he saw a weakness in their punting team that he knew he could exploit if given the chance.

Spencer told Groves to line it up and do some “pass-rushing moves,” which Groves said led to the block.

“People don’t realize how much a blocked kick can swing a game,” Groves said. “It’s something we take pride in day-in-and-day-out.”

Groves was also busy on the defensive side of things, getting a sack on Tom Brady – his first since his rookie season in 2008 with Jacksonville.

Groves admitted he lost his focus after getting his first 2 1/2 sacks in the league and had to regain that focus.

“I was focused on how much money I had in the bank and all these outside distractions,” Groves said.

Groves said the free-agency process made things much clearer for him, and now he realizes that the Cardinals are the right team for him.

“I think it’s the right fit for me,” Groves said. “Once I learn the scheme and learn the ins and outs of the scheme I think I’m going to do great things for this team.”

In the last four games that Kevin Kolb has appeared in, the Cardinals have won all four.

Kolb’s five-yard touchdown run in the fourth quarter on Sunday not only proved to be the game winning score yet again, but it was also the first rushing touchdown by a Cardinals quarterback since Kurt Warner did it against the Rams back in 2007.

Kolb says and his teammates knew it was going to be a “grind it out” kind of game against New England, and anything he needed to do to put his team over the top, he was willing to do, hence the scoring run.

Kolb says it’s great to be one of seven undefeated teams in the league, but he also knows that the Super Bowl isn’t won after two victories. There’s more grinding to be done.

“It’s like a marathon, there’s a big group of us right now,” Kolb said. “It’s who can outlast this thing and not get too high or low during the beginning of the season. [Let] Week Ten or Twelve [come], then see where you’re at.”

Cardinals come out of Patriots territory with 20-18 victory