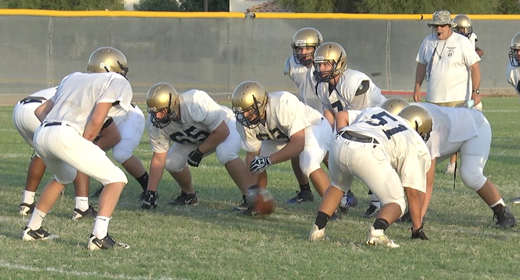 One of the most exciting rivalries in the state is back coming early in the first month of the season. The Ahwatukee Bowl between undefeated Desert Vista Thunder and undefeated Mountain Pointe Pride is this week and should bring as much excitement as ever.

“I always talk about this game as one of the best rivalries in Arizona,” said Desert Vista head coach Dan Hinds. “Just because we are so close to each other and these kids live in the same neighborhood. It’s going to be a great game.”

Both schools are separated by a little over four miles. Some kids who live walking distance to Desert Vista attend Mountain Pointe, and the same can be said the other way around.

Huge community bragging rights are on the line as usual. But this time, both teams are among the elite in the state.

“I think it’s good for both schools,” said Mountain Pointe head coach Norris Vaughn. “It should be an exciting game. They have a great team…and we’ve got a pretty good team too so it should be a good contest.”

Desert Vista had picked right up where they left off last season after winning a state title. They are led by their quarterback Matt Young who has done an excellent job filling in for Hunter Rodriguez who graduated last year.

The Thunder are a load to handle on the line on both offense and defense with Dylan Fischer and Zack Tamburo. Lorenzo Melvin and Nick Farina, who has been battling injuries this season, lead the charge on defense.

Mountain Pointe has loads of talent, especially on the offensive side of the ball. 6’5″ 270 pound Kenny Lacy is pooling over 30 division I offers and with good reason. He is an absolute monster. Also, Jalen Brown on the outside is one of the most athletic players in the state.

Desert Vista holds the bragging rights now after snapping a two game losing streak to the Pride last season. Over the last six meetings, both teams are even with three wins a piece.

Normally you see games of this intensity appear toward the end of the season, but this one over the last few years has come within the first month. It could help teams to inject a playoff level environment into their season early on.

“When you think about it, it is because sometimes in the beginning you have to wait for games like this,” explained Hinds. “But hey, here we go right out of the shoots.”

The Thunder and Pride kick-off for the Ahwatukee Bowl on Friday at 7:30 pm from Desert Vista High School.

‘Tis The Season for Visits, Quarterbacks Continue to Impress