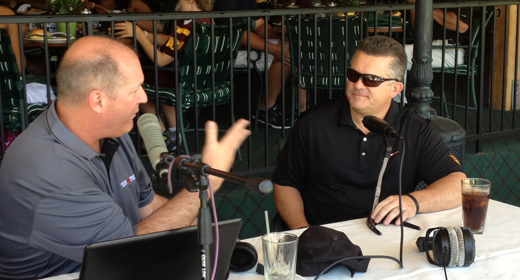 The Todd Graham bandwagon is growing in Tempe.

Since taking over a program in desperate need of a makeover last December, Graham has the Arizona State Sun Devil football program headed in the right direction both on and off the field.

The laid back approach of former coach Dennis Erickson and his staff has been replaced with focus, discipline and most important, accountability over the past ten months as Graham looks to build ASU into a national contender.

“Last week when we sat down with him, it was awesome,” former Sun Devil All-American linebacker now Pac-12 Network analyst Adam Archuleta told Brad Cesmat Thursday on ‘Big Guy on Sports.’ “He was so engaging. He was so honest. The more and more you talk to him, you gotta love him and the more you like his vision. I’ve been extremely impressed with Todd Graham.”

Archuleta was the color analyst during the Devils 37-7 blowout win over Utah last weekend in their conference opener. He said their conversation stretched from what the Sun Devil program needed to take it to the “next level” to just life in general.

“He wants to create an environment when you come [to ASU], it’s no [longer] about what you want,” Achuleta explained to Cesmat. “Now it’s about what the team is so you need to sacrifice…your needs, your personality, your wants, your desires. When you step in [the building], it’s all about the team.”

The former Chandler High and NFL safety said one of the biggest challenges college coaches face in this day and age is getting players to buy into the team-first mentality. Checking egos at the door can be difficult when most scholarship players come from high schools where they are the star of the show. Archuleta said with team success comes the individual accolades players frequently thrive towards.

“To be successful on the field, you need to be a smart person [off it],” Archuleta said. “Being a smart person breeds success. Everything these [players] do should support excellence. It’s not just about football. It’s not about the classroom. It’s a life skill. I really do think that’s important to [Graham]. He’s not just talking the talk.”

Check back to Pros2Preps.com for complete coverage from the Bay Area all weekend.