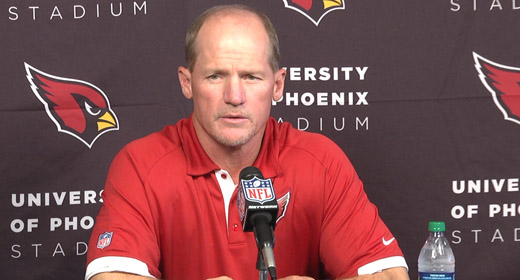 On Sunday, the Cardinals defense held the Eagles offense – ranked No. 1 at the time – without a touchdown for the first time since the 2009 regular season finale against Dallas.

Historically, Michael Vick has had major problems performing against the Arizona defense.

Vick has faced the Cardinals four times in his career, and has completed less than 50-percent of his overall pass attempts. The Cardinals defenses have sacked him 15 times, forced four interceptions and haven’t allowed a touchdown either through the air or on the ground to Vick.

As well as the defense has played through the first three games of the season, head coach Ken Whisenhunt sees ways the group can continue to improve and get better.

“We’ve got some things to correct,” Whisenhunt said. “We did some things yesterday that communication wise we’ve got to improve on, but they are playing hard.”

Whisenhunt singled out a few players like linebackers O’Brien Schofield, Sam Acho and Daryl Washington for how hard they work at perfecting their game.

Whisenhunt is pleased in the fact that each and every player on that side of the ball is out for one purpose: to win and win as a team, not as a bunch of individuals.

“It’s really how these guys communicate and work together,” Whisenhunt said. “When they go out there on the field and they work on Wednesday and Thursday and Friday, and how they talk and how they prepare, that’s why we are having success on Sundays, because we are able to execute as a team.”

The last time I checked, being 3-0 doesn’t win you a world championship. You play 16 games plus a full postseason for that honor.

Defensive end Calais Campbell also knows that the Super Bowl isn’t won in September, and that a 3-0 record can flip on its side quick fast if you lose your focus, which he and his teammates aren’t trying to have happen.

“It’s one of those things where you can get ahead of yourself,” Campbell said. “We’ve seen last year, we lost six games in a row, so as quick as you can win them, you can lose them, so we don’t get too ahead of ourselves.”

This defense is hungry, and you can tell by their tenacious and relentless play each and every time they line it up.

Cardinals safety James Sanders was the beneficiary of a crushing blow fellow safety Kerry Rhodes laid on Vick just before halftime on Sunday. Sanders took the fumble 93-yards the other way for a touchdown.

As Sanders ran down the sidelines toward the other end zone, all you saw was a steel wall of black jerseys – a convoy if you will – guiding Sanders to six.

That sight of Sanders’ teammates running with him is a testament to their belief that on defense, eleven play as one, and that mentality has them in a great position to do bigger things as the season unfolds.

“Our motto is ‘get better each and every week,'” Sanders said. “We’re never satisfied, we wanted to go out there and put up a donut, a zero. Unfortunately, they got two field goals, but we’ll take it. For the No. 1 offense in the league, to go out there and perform well and hold them to six points, that’s huge.”