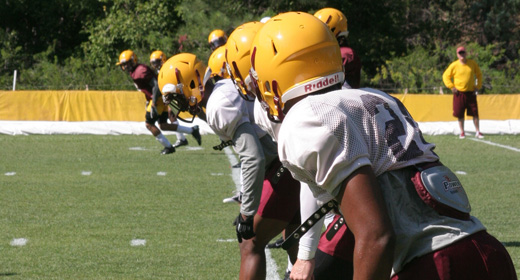 Coming into fall camp one of the biggest concerns for Todd Graham heading into his first season at Arizona State was at wide receiver where the Sun Devils graduated a host of playmakers including Gerell Robinson and Aaron Pflugrad.

The first five games of season hasn’t always been pretty, but it appears the trio of seniors Rashad Ross and Jamal Miles, along with junior Kevin Ozier are beginning to hit their stride in offensive coordinator Mike Norvell’s high-tempo, spread offense.

Ross followed up a solid game against Utah by catching a game-high seven passes for 84 yards, while Ozier grabbed a pair of touchdowns as the Devils (4-1, 2-0) defeated Cal 27-17 for their first win in Berkeley since 1997.

“Ive got great belief in my guys that they can make plays,” quarterback Taylor Kelly said after the game. “It makes my job easier when I’ve got so much confidence in those guys.”

Although all three players look to be turning the corner, it hasn’t come easy for any of them. Ross was criticized for his practice habits and poor route running, Miles has had trouble at times learning the scheme after playing more out of the backfield under former coach Dennis Erickson while Ozier, a former walk-on, has had to prove himself worthy of a scholarship under Graham.

What impressed Graham most about the play of Ross and Ozier against the Golden Bears was each made big plays to either keep drives alive or found the end zone as Ozier did, including a game-clinching 22-yard strike from Kelly with just over six minutes to play.

“Watching those guys continue to grow,” Norvell explained to the media. “We’re challenging them every single day. It’s good to see them have another solid outing.”

ASU will enjoy their only week of the season next weekend before returning to action Thursday, October 11 on ESPN against Colorado in Boulder. Kickoff is set for 6:00.

Past struggles with Cal not a notion for ASU