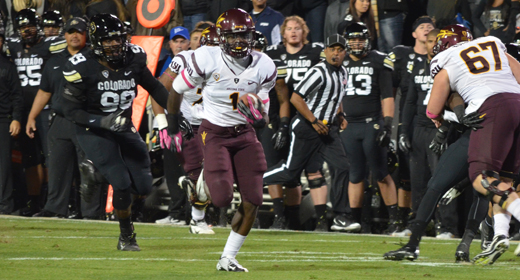 Rashad Ross returned the second half kickoff 100 yards to break open a three-point game and quarterback Taylor Kelly would throw for five scores as Arizona State would turn back the Colorado Buffalos 51-17.

Kelly would complete 20-28 for 308 yards and five touchdowns. He would also rush for 67 yards, some coming at crucial points to keep drives alive

Arizona State started the scoring mid-way through the first quarter by way of the running game. Kelly scrambled for 23 yards and Marion Grice took a screen pass 37 yards for the score to make it 6-0 Sun Devils. The extra-point was blocked as the kicking game continues to be a troubled area for the team. The Devils dominated the first quarter stats, rolling up 150 yards of offense.
[slideshow_deploy id=2857]

Kelly would throw two touchdown passes in the second quarter. One in the back of the end zone to a diving DJ Foster and the other, a 16 yard laser to Marion Grice out of the backfield to give ASU a 20-7 lead.

But CU grabbed momentum going into the final 4:24 of the first half.

Buffs quarterback Jordan Webb completed four passes on a 11-play, 75-yard drive capped off by a 20-yard touchdown pass to Nick Kasa to make the score 20-14.

On the ensuing kickoff the ASU special team troubles continued when Jamal Miles fumbled. CU would recover and tack on a field goal on the final play of the half to trail by just three, 20-17.

With the victory, the Sun Devils improve to 5-1 and 3-0 in the Pac 12 South. They have a showdown with #2 Oregon next Thursday in Tempe.