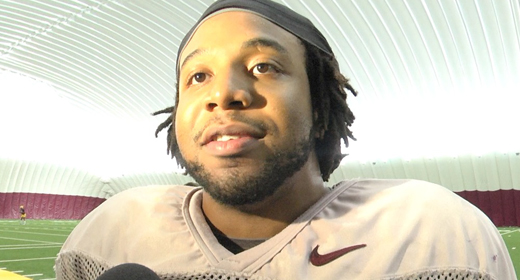 Denver, Colorado native and ASU defensive end Junior Onyeali bursted onto the scenes as a freshman for the Sun Devils leading the team in sacks with 10.5 in route to being named 2010 pac-10 Defensive Freshman of the Year. This Thursday, Onyeali will return to Colorado to face the Buffalo’s and has his first opportunity to play in front of of those close to him since graduating high school.

“I am going to have a lot of family, a lot of friends, a lot of people that have been there for me there for me and I just cant wait. Im excited,” said Onyeali after practice on Monday.

Coming out of Mullen High School in Denver, Onyeali was named Maxpreps.com’s second team All-American list and was the 2009 Colorado Defensive Player of the Year leading his team to an undefeated season and a class 5A state championship. To this day, he continues to live by two main attributes which made him successful growing up.

“From little league on it was just hard work and fun,” said Onyeali. “You always have that want but also never losing the love of the game.”

Things changed back in 2011 for Onyeali compared to the success he had as a freshman. Battling through a torn meniscus and off the field issues which lead to him missing a big chunk of the season and then being suspended for the Las Vegas Bowl.

But now in 2012 Onyeali is back and one of the leaders of this ASU defense, which has been a force. Behind the support of Todd Graham, Onyeali has grown and matured and the entire Sun Devils team is reaping the benefits.

“I feel like I have grown as a person and as a football player but in my eyes I have so much room to grow,” explained Onyeali. “I can’t even focus on the past.”

“He is very appreciative,” mentioned ASU head coach Todd Graham. “He comes up to me and thanks me and says ‘coach you know, I really appreciate what you’re doing for me.’ He’s really just grateful. He has attitude of gratitude and I’ve been really pleased for him. He’s been a joy to coach.”

“He has probably had to do more than any person in this program to be on this team,” mentioned Graham. “He pulled a 3.0 GPA last spring, he’s done everything we’ve asked him to do, he goes out to practice everyday and is one of the hardest working guys on the field.”

Onyeali is just one of seven players returning home to Colorado this Thursday to play in front of friends and family. Each excited for ASU’s first ever conference road game at Folsom Field in Boulder.

“We’re going hard and I am going back home,” said Onyeali. “So it’s going to be fun.”