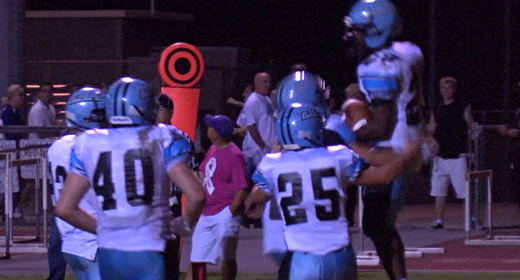 The Cactus Cobras were 6-2 heading into Friday night’s contest at 7-1 Sunrise Mountain.

Cactus quarterback Talal Yousufzai said he and his teammates felt “disrespected” during the week leading up to the game.

Whatever lack of respect given to Cactus is sure to be turned to actual respect, following their 49-28 victory over the Mustangs.

With the win, Cactus improves to 7-2, while Sunrise Mountain fell to the same 7-2 record with the loss.

The Cobra defense held the Mustang offense well below its 51 point per game average on Friday night, mainly by containing quarterback Neiman Sneed and not allowing the ever-dangerous wide receiver Elroy Masters, Jr., to break through the second and third levels of their defense.

I didn’t say they totally stopped Masters, because he got his catches and yards, but he only hit the end zone once, which was the very first score of the game, as Sneed found Masters over the middle, and Masters used his body and his strength to fight his way into the end zone, as Sunrise Mountain took a 7-0 lead.

Cactus would use their running game to great effect, getting three first half scores on the ground.

Yousufzai would take one in, running back Jaylon James would add one [he’d have four by the end of the night] and tight end Zach Bowles would have another, as Cactus had a 19-14 lead at halftime.

In the third quarter, defensive back Josh Kindred would strip Sneed of the football, which the Cobras would take advantage of, as they went up 27-14, a lead Sunrise Mountain would never quite be able to come back from.

Cactus head coach Larry Fetkenhier was proud of his defense, and how they kept the Mustangs’ deadly offense in check.

“They’ve scored a lot of points on everybody,” Fetkenhier said. “I think to hold them to 28 points is a [heck] of a job.”

Fetkenhier was quick to point out that his offense is pretty good as well. Cactus is averaging 41 points per game.

“We’ve kind of gotten to the point where we’ve gotten better,” Fetkenhier said.

Yousufzai says the offense took its cues from the defense, which made it a complete team victory.

“We fed off the defense, when they’re going [and ] making big plays,” Yousufzai said. “Our offensive line have been making big plays, pushing their d-line back. We just came here to prove something, because we felt disrespected the whole week.”

Cactus will hit the road yet again for its season finale.

Next Friday night they draw the Liberty Lions (8-1) in Peoria, Ariz., while Sunrise Mountain will celebrate its homecoming next Friday night, as they’ll host the Glendale Cardinals (0-9).