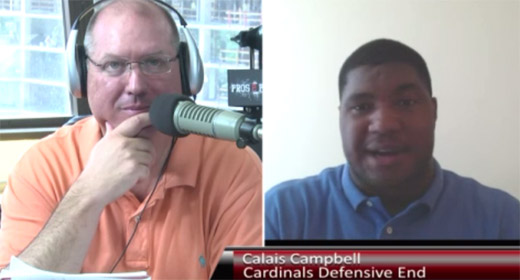 Throughout the NFL season Arizona Cardinals defensive end Calais Campbell joins Brad Cesmat every Tuesday at 12:15 on ‘Big Guy on Sports’ on XTRA Sports 910 and Pros2Preps.com.

Each week he shares with us his ‘Calais Keys’ for the Red Birds upcoming opponent.

Following the Cards first loss of the season 17-3 last Thursday in St. Louis against the Rams, the Red Birds return home to face the Buffalo Bills Sunday at University of Phoenix Stadium.

Accept and embrace the role of favorites

“I think we do better being the underdog. When we’re supposed to do well with kinda have a mentality that it’s entitled to us. Even when we’re the favorite we still have to have the mentality that we’re going to go in there and show you that you don’t belong on the same field as us.”

“In this game, you never know. They might come out swinging [Sunday]. If they go out there and start winning games they could get right back into the [playoff] race, again. You can’t overlook anybody or anything. The NFL is about responding. I know if they play their best game and we play our best game, we should win. If we don’t play our best game and they do, we’re in trouble.”

“Our offense feeds off of us so if we go out there and make plays on defense…get turnovers and give them short fields there’s no reason we can’t score a bunch of points.”