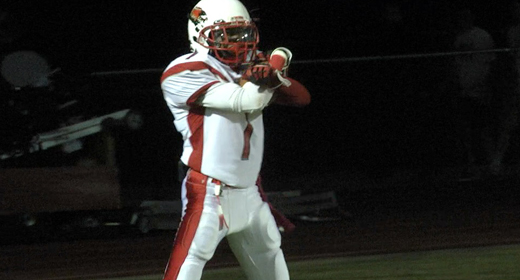 One of the best rivalries in the state wrote its latest chapter on Thursday night as the 7-2 Saguaro Sabercats hosted the 6-3 Chaparral Firebirds.

When these two teams met a year ago, former Saguaro head coach John Sanders decided to sit his starters to keep them healthy for the playoffs. The end result was a Chaparral blowout win.

Both teams played all the starters this time but again it was Chaparral who fired on all cylinders. They got the job done on offense, defense and special teams in route to a big first half lead and eventual 38-20 win over Saguaro.

“We’re on a serious roll,” said Chaparral head coach Dave Huffine. “We’re 0-0. We’re not in a 1-3 hole anymore. Now everyone’s zero-zero, were getting into the tournament and were going to do our best to go in there and win the thing.”

The defense was what helped Chaparral create the separation early. One of the leaders for the Firebirds, senior Jake Roh was everywhere. The defense held Saguaro to just seven first half points.

“You can give the MVP to the defense,” mentioned Huffine. “They spent an awful lot of time not just on the field but in walk throughs, in the film room and spending that extra amount of time you have to for a Saguaro team that is capable of a quick strike at any time.”

Last week’s Arizona Cardinals/Wells Fargo Player of the Week, quarterback Brad Schenker, had six touchdowns against Horizon and picked up right where he left off against the Sabercats. On top of throwing one touchdown pass, he also ran for two as part of Chaparral’s 35 unanswered points in the first half. He finished with 162 yards passing for the game.

“He’s really deceptive,” explained Huffine. “He’s been a bright spot for us, especially in the second half of the season.”

Chaparral, who started the season 1-3, have now won six straight to finish the season 7-3. They could now be looking at a possible home game in the first round of the playoffs.

It’s now back to the drawing board for Saguaro as they head into post-season play. Finishing the season 7-3 as well, they will look to correct some mistakes in a hurry and create some magic in November that everyone is accustomed to seeing from them.

Both teams begin the run to defend their titles (Chaparral in Division II and Saguaro in Division III) next week for round one of the state tournament.