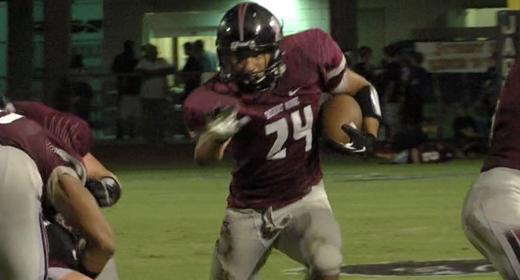 Last season, the Basha Bears had a dominating offensive attack both on the ground and through the air. That ground attack was led by then junior J.J. Husar who had 14 touchdowns and 785 yards on the ground.

Now the Desert Ridge Jaguars are enjoying a strong running attack. Husar transferred to the Jags over the summer leading into his senior year and is now leading the team in rushing yards and touchdowns. So far so good in another uniform for Husar.

“I was a new kid here but they are a welcoming bunch over here,” said Husar after his teams win over Red Mountain last week. “I feel like I am part of the family already.”

Well the new kid had fit in great. Behind what Husar himself calls the best offensive line in the state, he only has 20 less yards rushing through six games as he did all last season with the Bears and has 11 touchdowns.

“Our whole front five is killing everyone so I just have holes to run through,” explained Husar. “I’m proud of them.”

Next up for the Jags is that Basha Bears team that Husar knows so well. So will a win Friday mean a little extra?

“I mean I know everyone, know every number and know everything about them,” Husar mentioned. “I’m not going to let it get to me, my emotions get to me and I’m just going to play my hardest and see what happens.”

When going to a new team at any level in football, normally there is an adjustment period. But just by looking at his numbers alone, that period did not last long. Even though the styles of play are different between Desert Ridge and Basha, the most underlining factor of football made the transition smooth.

“A system’s a system you know, play for my team, play for your brothers,” said Husar. “I just try to do my part and they do their part…it’s a team sport.”

Team aside, Husar has gained increased attention from a recruiting stand point this season. Currently Southern Utah is the team that has shown the most interest but more could be coming.

“I’m just trying to get my grades up right now, focus on school work and then see how the rest of the season goes,” Husar explained. “Then hopefully I’ll go to a DI college.”

Husar his Jaguars face off with his former team, the Basha Bears on Friday from Basha High School.