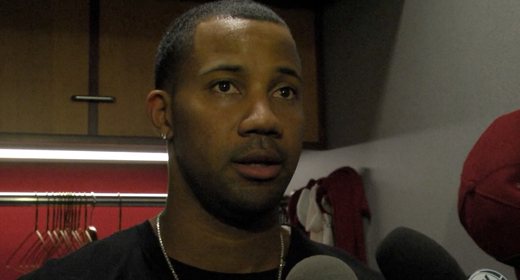 The best way to describe the 2012 diamondbacks could possibly be as easy as looking at there 81-81 record.

“I think the foundation is there between our team and our organization,” explained Diamondbacks manager Kirk Gibson. “Our play just didn’t really match the mechanics of what we have.”

If you look at the team from an individual standpoint, it would be hard to tell that this team was un-able to string together a big month or at least a solid few weeks. First baseman Paul Goldschmidt got over his early season struggles and finished with 20 home runs and 82 RBI’s hitting in the middle of the lineup. Miguel Montero also hitting close to .290 with over 80 RBI’s and continuing to improve his play behind home plate. And you cannot leave out Aaron Hill and his two cycles and 26 home runs as well as the pleasant surprise Jason Kubel was for most of the season.

From a pitching standpoint, Wade Miley was an amazing surprise for someone who almost didn’t make the opening day roster. Kirk Gibson back in April said he was someone who he just couldn’t leave off. And that proved to be right. Ian Kennedy after his spectacular 2011 season, struggled to string quality starts together in the beginning. But since the All-Star break, Kennedy had a 9-4 record and finished with 15 wins on the season. Finally, the bullpen led by JJ Putz and David Hernandez were just as good, if not better than in 2011.

Sure Upton’s numbers weren’t as stellar as many hoped from a power stand point, despite tying for the league lead in runs scored, but other than him, if you look at this team individually, it’s hard to comprehend why this team floated around the .500 mark for most of the season.

“I think about the potential that we had and the expectations that we had,” mentioned Diamondbacks center fielder Chris Young. “We just weren’t able to get it done.”

“It’s been a long season, with up’s and down’s,” added Diamondbacks right fielder Justin Upton. “Just going to take a step back in the offseason. Re-cooperate. We will go into the off-season optimistic and see what happens.”

So begins an off-season that expects to see change. The team has six outfielders that are all capable of playing everyday for the Diamondbacks. One that could be on the way out as a result is Chris Young. The fans in attendance for game 162 were well of that and gave Chris Young a nice ovation as he came to the plate as a pinch hitter.

“The fans have really taken me in really well here and I appreciate that,” said Young. “The crowd definitely gave me that feeling when I was walking to the plate and that was special for me for sure.”

2,177,617 fans attended Chase Field in 2012 which is the most since the 2008 season. The fans should remain optimistic with the core the Diamondbacks plan to bring back to make a run at the playoffs in 2013.