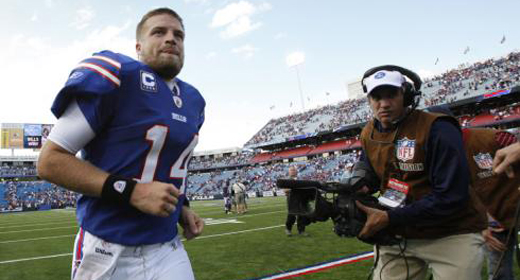 Head coach Chan Gailey decided to bring his team to the Valley for the week, instead of having them go back to New York, jump on a plane and come back across the country to take on the Cardinals on Sunday.

Fitzpatrick says it’s been great so far training in the Valley with his fellow teammates.

“It’s a unique situation for me, being able to spend some time at home with my family during the season in Arizona,” Fitzpatrick said. “Monday and Tuesday were nice, but now it time to get down to business again.”

Fitzpatrick thinks the lack of cross-country travel will benefit the team this week.

“The biggest thing is they’re trying to make it easier on the players,” Fitzpatrick said. “It’s been a real smooth transition and week so far, and our guys have done a great job of it.”

Both of Fitzpatrick’s parents attended Arizona State, so naturally he has very fond memories of the university and Sun Devil Stadium in particular.

“Growing up, we used to go to all the games,” Fitzpatrick said. “We used to park all the way across campus, a mile plus walk to the stadium.”

“It was great family time for me, my three brothers and my parents to go to all those games and grow up in that stadium,” Fitzpatrick said.

Fitzpatrick said Jake Plummer and Pat Tillman were among his favorite Cardinals growing up.

The Bills were utterly destroyed in their last two games – both losses to the Patriots and 49ers. They were outscored 97-31 in the two games.

Fitzpatrick says the team has rebounded, and has a “great mindset” heading into the Cardinals game on Sunday.

“We’ve got a new game plan, and we’ve obviously got a new talented opponent that we’re playing this week,” Fitzpatrick said. “100 percent of our focus is now on the Cardinals.”

Fitzpatrick and the Bills saw a great defense last week in the 49ers, and now they get to see another one in the Cardinals.

“The thing that jumps out at you is they’re fast, they’re all over the place, real aggressive in what they do,” Fitzpatrick said. “Part of it is gonna be getting our guys on the right guys and not getting confused and getting caught up in the twists and games that they do.”

Hearing Desert Vista has made a decision on their new head football coach to replace Ty Wisdom who resigned earlier this month. Expect an official announcement tomorrow afternoon or evening. @Sports360AZ
View on Twitter
2
0

Hearing Desert Vista has made a decision on their new head football coach to replace Ty Wisdom who resigned earlier this month. Expect an official announcement tomorrow afternoon or evening. @Sports360AZ
View on Twitter
2
0

Hearing Desert Vista has made a decision on their new head football coach to replace Ty Wisdom who resigned earlier this month. Expect an official announcement tomorrow afternoon or evening. @Sports360AZ
View on Twitter
2
2