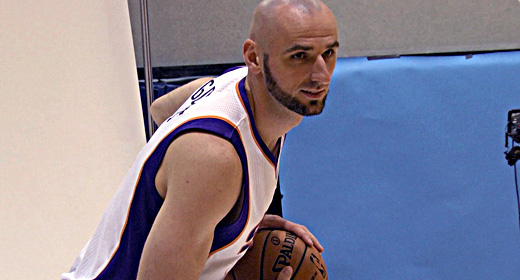 Marcin Gortat has played well since coming to the Phoenix Suns via trade back during the 2010 season. He adapted to the fast paced style of offense and stepped into the role of running the screen and role along with Steve Nash which is not necessarily an easy task.

Now Nash has moved on to the City of Angels which has forced people to wonder whether or not Gortat’s production, especially offensively, will diminish without one of the best point guards to ever play the game. Gortat turned heads when he had this to say about Nash no longer being with the team.

“It’s definitely going to be a different team without him (Nash), but I am excited,” said Gortat at Suns media day on Monday. “I am looking forward to playing without him.”

There are many that have tried to go out of their way to play with Steve Nash and not many that have looked forward to playing without him. So his comments were a little shocking. Gortat always praised Nash and expressed how valuable he has been to his career. There were a few times however where you could see Nash and Gortat go back and forth a little bit expressing frustration on the court.

So how is Gortat going to respond the nay-sayers out there about where his game will go with Nash gone?

“Well basically I am going to prove it and show that I can play without him (Nash),” said Gortat. “There was a lot of talking the offseason how I am going to play and if I can handle the whole situation without him.”

Gortat last season averaged 15 points and 10 rebounds and was the most consistent scoring option for the Suns last season. However, he did admit himself that he started to fade a little by the end of the season which reflected in his play down the stretch. Nash or no Nash, the Suns will need him to be more reliable this year if the team is going to exceed expectations.

“I know there is a lot of pressure on me and I am just going to try to perform,” mentioned Gortat. “As long as I go onto the court and do the things people expect me to do, we should be fine.”

Gortat and the Suns play their first pre-season game on October 10th against the Kings in Sacramento.