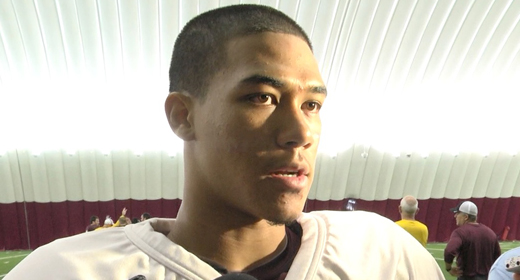 If you were following the Sun Devils in the spring, junior J.J. Holliday and senior James Morrison would have been guys you would have expected to get plenty of reps offensively for the Sun Devils this season. However, through five games, both have barely seen the field.

During the bye week, Holliday and Morrison both took reps on the defensive side of the football. Holiday in the secondary and Morrison lining up in pash-rush formations. Graham has already done this with running back turned nickel corner Deantre Lewis to add depth to the position during the season. According to Graham, moving these two are being done so for the same reason.

“For the most part we have stayed really healthy but we don’t have any depth at really critical positions,” said coach Graham at his weekly press conference on Monday. “We have probably moved more people around this year than I have in a while…I’m just trying to be proactive in that I ask those questions if we had this many guys go down at this position.”

“I talked to Coach Graham a little bit and he said we are kind of lacking some depth at the corner,” added J.J. Holliday. “Since my reps started to drop offensively, I thought it was a good move.”

Graham in total has moved six players from their previous position since taking over the program. Five of them have been from offense to defense. Both Holliday and Morrison have not played on the defensive side of the football since first setting foot on ASU’s campus. However, playing defense is something Holliday is familiar with as he played cornerback and safety at Santa Rita High School in Tucson.

“We think he (Holliday) can run well and he has some potential there from what I have seen,” added Graham.

Moving players around is not something that coach Graham is a fan of. Most of the players who have made the move have not seen the field any more except for Lewis. Graham mentioned that his High School coaching past could have played a factor in managing his talent like this.

Despite the struggle of not only changing positions but also changing sides of the ball, Holliday mentioned why he believe is will be a smooth transition for him.

“Honesty, coach Graham’s schemes are amazing,” explained Holliday. “Now I know why our defense works like this. It’s not even about the players, it’s the scheme.”
In the spring, one of the biggest standouts for ASU on offense was James Morrison. But with the depth of Marshall, Foster and Grice ahead of him playing well, Morrison has failed to see the reps we saw during the spring. While a lot of the moves Graham has made have seemed like more permanent moves, Morrison’s is one that might not be.

“James (Morrison) will still be on the depth at back-up running back…we’re just trying to see if he could help us as a third down pass rusher,” explained Graham. “The guy is a heck of a football player. There are a lot of good guys at that position and we’re saying maybe there is something we can do. The guy wants to play, he’s a senior, if he can rush the passer and help us, we’ll work and see that.”

Kick-off Thursday for the Sun Devils and the Colorado Buffalos is at 6:00pm from Folsom Field in Boulder.