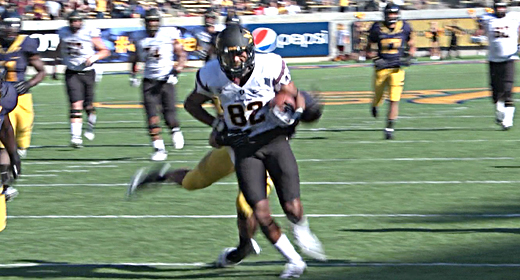 Arizona State’s surprising 4-1, 2-0 start has been a team effort on offense, defense and special teams.

Since taking over for Dennis Erickson, Todd Graham has preached a team-first mentality and asked players to put the team’s goals in front of their own.

Graham has since returned the favor to junior wide receiver Kevin Ozier.

The junior from San Diego had a breakout game catching two touchdowns, including the game-clincher midway through the fourth quarter in the Sun Devils 27-17 win over Cal. It was ASU’s first win in Berkeley since 1997.

“I was going to go to a community college in San Diego,” Ozier told Pros2Preps.com Tuesday. “[But] I knew I had potential to compete at the Division-I level so I walked on…busted my tail for three years and was finally awarded a scholarship through my hard work.”

Ozier played quarterback in high school, but his promising junior year was cut short by a broken ankle. The injury also cost him half of his senior year which turned off potential schools and eventually cost him an immediate scholarship.

Used sparingly his first two years under Erickson, he caught the attention of Graham after watching film before spring workouts.

“[Graham] said he saw great playmaking ability,” Ozier said to Pros2Preps.com. “He said I’m a physical receiver who’s not scared to go across the middle or block.”

The mostly inexperienced ASU receiving group, as a whole, is still a work in progress but Ozier, along with seniors Rashad Ross and Jamal Miles have shown more consistency in recent weeks.

Ozier believes quarterback Taylor Kelly deserves credit for allowing the receivers to work through their routes and find gaps in the secondary.

The Devils are off this weekend, but return to conference play on Thursday, October 11 when they go back on the road to take on the Colorado Buffaloes (1-4, 1-1).

Pros2Preps.com and ‘Big Guy on Sports’ will be in Boulder next week with complete coverage before, during, and after the game as the Devils look to stay perfect in Pac-12 play.