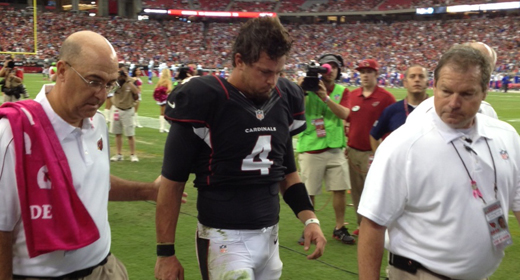 Kevin Kolb has been bruised and battered in recent weeks, and all that punishment finally got the best of him.

“Tests on Kevin Kolb showed no rib or sternum fracture. He does have rib cartilage damage and SC joint sprain. Out for unspecified time frame.”

ESPN’s Adam Schefter is reporting that Kolb will be out for “several weeks,” according to a “team source.”

If that’s the case, Kolb will miss the Vikings game this Sunday and the Monday night game against the 49ers on Oct. 29.

We won’t get any more definite information on the length of Kolb’s absence until tomorrow, when head coach Ken Whisenhunt speaks to us in his normal slot after practice.

Just when it seemed like Kolb was starting to come into his own in offensive coordinator Mike Miller’s offense, another injury comes and derails him again.

Last year, Kolb tore ligaments in his toe and suffered another foot injury that put him out for several games. A concussion then effectively ended his season.

With Kolb’s injury, the No. 1 quarterback spot goes back to the original incumbent, John Skelton, who came in for Kolb this past Sunday against the Bills, when he went down.

With Skelton and Ryan Lindley being the remaining two healthy quarterbacks on the Cardinals roster, it would seem like the team would have to entertain the thought of bringing in another quarterback, at least until Kolb returns and he’s ready to go.

If that’s what they decide to do, then they’d also have to decide if that player is worth keeping on the roster as a fail-safe, just in case something like this happens again.