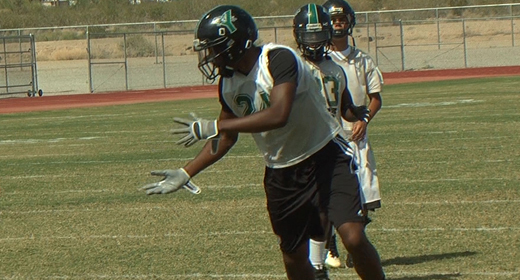 The Youngker Roughriders lost their first four games of the season, and in those games, running back Clarence Smith had decent production in those games.

So far, for the season, Smith has 731 yards rushing and nine touchdowns.

The 6’4″, 200 pound Smith made history in being the first football player from Youngker to get an offer from a Division I school – the school being the University of Arkansas at Pine Bluff.

The University of Arizona, according to head coach Mat York, texted Smith a few days ago, and is showing interest as well.

NAU and Glendale Community College are also checking Smith out.

The amazing thing about Smith is that he’s at this point after playing just a total of 11 games at the running back spot dating back to last season.

“He’s not even close to peaking as a running back, and that’s scary,” York said.

York gives credit to his offensive line for “creating holes” for Smith to do work, but he says Smith doesn’t really need help from his line to make things happen.

“He’ll break it outside, and he’s got the speed and tenacity to take it to the house,” York said.

Senior left tackle Trevor James likes blocking for Smith, because he says Smith is so fast that his blocks “don’t have to be so long.”

“We have good momentum every time he breaks a good run,” James said. “We just keep truckin’ right down the field.”

James says Smith is very “motivational” in the locker room, and he keeps all his teammates in high spirits, even when things aren’t going so well.

Junior quarterback D’Angelo Calderon says Smith is an absolute dream for the Roughriders, and a nightmare for opposing defenses.

“It’s absolutely amazing, every defense has to key on him, no one can leave him open,” Calderon said. “Obviously it makes the play action very great because a lot of times you hear in the huddle ‘Hey look at 25, 25, key on 25,’ and that makes my job a lot easier.”

Smith says he already does a good job of being responsible for himself on a daily basis, but he says he can stand to be even more accountable to himself.

“I need to start planning ahead better,” Smith said. “I need to look ahead and see what’s really in store for me and try and plan for it more.”

What’s in store for Smith is a career in college football, and possibly one in the NFL if he continues to play at the level he’s playing at right now.

“He’s still gonna develop, he’s gonna blossom once he gets to college,” Calderon said. “Plus they’ve got someone very talented and someone that’s a great leader. I think they’re gonna get a great person and a great athlete.”