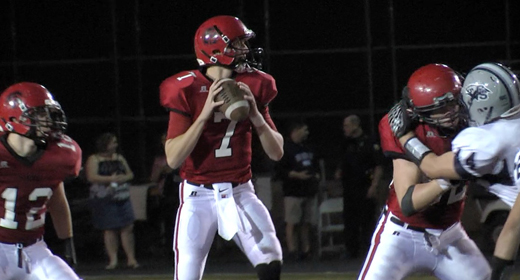 Coming into this game, the story was all about the quarterbacks.

Paradise Valley’s Ryan Finley leads the state in passing yards at this point in the season while Cactus Shadows quarterback Bryce Kinsler was 249 yards away from setting Arizona’s all-time record for total passing yards.

The Trojans played as complete a game you will see on offense and on defense which paved the way to a 42-16 win over the Falcons.

PV came into the game 15th in the power rankings so this was without a doubt a big win at a crucial time. Finley, the Boise State commit, threw for 355 yards, three touchdowns and a rushing touchdown in the game leading the way for the Trojan offense. Their running game was crucial led by Bailey Thompson who had 163 yards on 21 carries.

The Trojan defense came up huge as well. Taming that Falcon offense has not been easy this season and despite a slow start, PV held Cactus Shadows scoreless in the second half.

It has been a tough season for Cactus Shadows as they have battled injuries and just haven’t been able to pull together a complete game. But there has been a lot of buzz surrounding quarterback Bryce Kinsler who has had a remarkable career in a Falcon uniform.

Earlier in the year he set a single game state record for 639 passing yards against Prescott. In the first half of this game against Paradise Valley, Kinsler set the record for most passing yards over a career in the 4A class. However, he came up only 12 yards short of setting Arizona’s all-time passing yards record at any level against PV. He will however have the opportunity to break it in the final game of the year which is a home game which just so happens to be homecoming at Cactus Shadows as well.

“It hasn’t really hit me yet. It’s unreal though,” mentioned Kinsler. “I think it would be better if I did it there at homecoming. Hopefully with a win also.”

“We didn’t want that celebrated on our field,” added Finley about Kinsler’s record chase. “Defense did a hell of a job to keep him from breaking it but I hope he breaks it next week.”

PV moves to 6-3 on the season with as Finley put it, a big game with playoff implications against Fountain Hills next week. Cactus Shadows falls to 2-7 on the year but expect a lot of fireworks in their last game next week against Shadow Mountain.