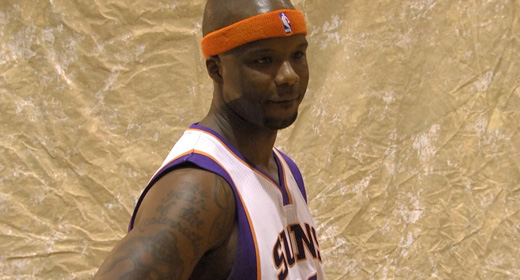 Everyone has been to one of those parties, or meetings or get togethers where you are handed a ‘hello my name is…’ sticker when surrounded by strangers.

That is the theme of the 2012-13 Phoenix Suns as 12 of the 18 players on the training camp roster, were not on the team a year ago. Joking aside, these players know each other and most knew of each other before being brought together this season. But for a team starting a new era, building chemistry among all these new faces will be key.

“The NBA is almost like a small family so you know guys like Wesley (Johnson) and (Michael) Beasley and guys like that but I think for the city of Phoenix they do,” explained Suns forward Jared Dudley when asked if the players should wear ‘hello my name is’ stickers. “We went out to the ‘W’ the other night and the security team wouldn’t let Kendall Marshall in. They didn’t know who he was.”

“For you all for sure,” added Suns second year forward Markieff Morris when answering the same question. “These are guys you grew up watching and they are just normal faces now.”

There was a different vibe to media day this season. Though the Suns organization has moved on, the name Steve Nash was mentioned by multiple players.

“There are a lot of new faces and obviously one of the most important faces is gone, Steve Nash,” said Suns center Marcin Gortat on Monday. “It’s definitely a different team.”

“Obviously Steve and Grant (Hill) aren’t here and obviously they are tremendous players, but it’s a new team,” added new Suns center Jermaine O’Neal. “I think overall this team is better one through 15 then they were last year as far as talent.

The Suns will begin the quest of building that chemistry with all of these new faces immediately as they are off to training camp for two-a-days in San Diego for the rest of the week.