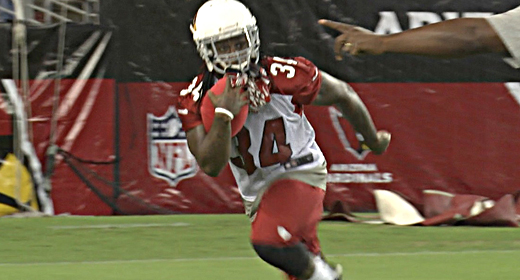 The Cardinals running game has been struggling to gain any traction this season, and now it’s going to be even harder to get anything going with the news that running back Ryan Williams is lost for the season.

Williams will need surgery on the left shoulder he injured last Thursday night against the Rams.

Williams injured the shoulder in the fourth quarter when he and Rams safety Darian Stewart collided. Williams laid motionless on the turf after the collision. He eventually made his way to the sidelines afterwards.

Head coach Ken Whisenhunt was understandably somber when he delivered the crushing news.

“It’s a tough thing for Ryan,” Whisenhunt said. “We didn’t think after the game it was going to be the case, but in getting the tests done on it and talking with the doctor yesterday, it’s something that’s going to require surgery.”

If there’s a silver lining in this whole situation, it’s that Williams won’t suffer any long-term effects according to Whisenhunt.

Whisenhunt says the timetable for Williams’ recovery will be three months.

“What I told Ryan when we sat down is that at least this time [you] won’t have to deal with it through an offseason,” Whisenhunt said.

Whisenhunt said Williams will be able to take part in the off-season program and practices once his recovery is complete.

The Cardinals depth chart at running back is now comprised of LaRod Stephens-Howling, William Powell and Alfonso Smith, all of whom Whisenhunt backs 100 percent.

“I feel good about the guys we’ve got,” Whisenhunt said.

As far as adding more bodies to the backfield, Whisenhunt didn’t rule it out.

Whisenhunt knows that these kind of situations come with the territory. He says the team has to roll on.

“That’s the NFL,” Whisenhunt said. “Teams have to fight through adversity and keep going, and we’ve done a good job at that.”

“Now we’ve got another challenge,” Whisenhunt said. “That’s okay, we’ll work through it.”

Sports360AZ Retweeted · Brad Cesmat
@bradcesmat
Pac-12 power ratings: What happens when you have a collection of good teams? Big games, that’s what - https://t.co/ScFQluiOdN via @sports360az @wilnerhotline
View on Twitter
1
0
Go to mobile version