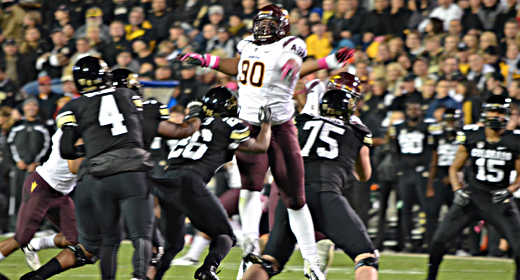 Without a doubt, Thursday is the biggest test of the Todd Graham and quite possibly the biggest matchup ASU has had in quite some time. The Sun Devils, now ranked 24th in the coaches poll, take on the number three team in the BCS standings, the Oregon Ducks.

There is no correct formula to stopping the Ducks in recent history. This season, just like they have been over the years, their high-octane offense has them statistically ranked toward the top in most categories and hold the longest active streak in the nation for most consecutive weeks scoring at least 42 points. That streak currently for the Ducks is currently at nine.

ASU head coach Todd Graham might not have the answer of how to stop the Ducks, but for his first time facing them as a coach in the Pac-12, he has an idea of what his team needs to do. And a lot of that is not changing what they do just because of who that are playing.

“Number one thing I tell them is look you have to score,” mentioned Graham. “We cannot just sit there and try to slow down our pace and shoot ourselves in the foot. We have to run our system.”

Though six games, ASU has statistically been right there with Oregon on offense. Oregon ranks first in the conference in points per game (52.3) where as ASU is second (40.6). ASU quarterback is the Pac-12’s most efficient passer, while Oregon’s Marcus Mariota is right behind him in second.

“The bottom line is we have to sustain drives, we have to move the football, we have to score points,” explained Graham. “If you get into a situation where you get behind and you start throwing the ball, that’s not where we want to be…You want that scenario where were getting the 80+ plays and that we keep them under 70 which is a challenge.”

ASU’s defense will be under the microscope as expected. The defense has been a pleasant surprise despite the lack of depth that Graham has mentioned he is worried about all season. Since the Sun Devils have been able to stay healthy on that side of the ball, the top guys on the depth chart led by Will Sutton, Chris Young and Brandon Magee have the Sun Devil defense leading the conference in total defense, scoring defense and second in the nation in tackles for loss.

But can this defense that is talented but lacking in-depth, manage four quarters against Oregon?

“The odds that we are going to play more snaps than we’re used to playing, that’s going to pretty hard for that not to happen,” stated Graham. “I’ll tell you what I am focusing on is every turnover we get, in my years of coaching you get five less snaps. So you get four turnovers, play 20 less snaps, keep it under 70. That’s the formula to win.”

Not only do the Ducks have active streaks in points that are best in the nation, they have active winning streaks that seem un-parallel as well. Oregon has not lost a road game in 11 tries. The last road loss was November was November 7, 2009 against Stanford. Head Coach Chip Kelly also has not lost a game from week two through week eight since becoming coach a little more than three years ago. In addition to all of that, Oregon has a seven game winning streak against ASU including 11 of the last 14.

Naturally, Graham isn’t taking any of that into account.