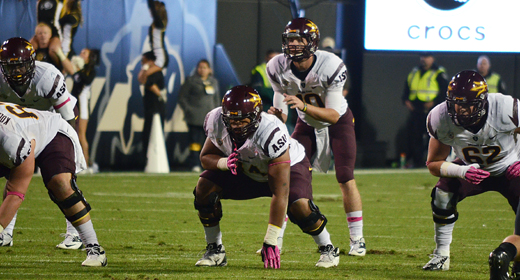 Nobody knew exactly what to expect from Taylor Kelly after he was named Arizona State’s starting quarterback by Todd Graham at the conclusion of fall camp.


But 1600 yards and 14 touchdowns later ASU fans have a pretty good idea of how the redshirt sophomore from Eagle, Idaho handles himself between the lines.

With that being said, the biggest test will come Thursday when Chip Kelly and the 2nd-ranked Oregon Ducks (6-0, 3-0) hit town in what may are expecting to be the biggest game for the Devils (5-1, 3-0) since they knocked off top-ranked Nebraska 19-0 in 1996.

“I saw them play [against Washington],” Kelly told Brad Cesmat Friday on ‘Big Guy on Sports’ the night after he threw for over 300 yards and five touchdowns in the 51-17 win over Colorado. “I’m excited. I can’t wait to get rollin’ on them and start studying them. We need to keep our focus and play the way we can play and not let the distractions get to us.”

Focus hasn’t been a problem for Kelly who’s calm demeanor and steady play in practice and in games helped separate him from Michael Eubank and Mike Bercovici in the quarterback battle following the announcement Brock Osweiler would forego his senior season and enter the NFL draft. Kelly has completed 68% of his passes with only two interceptions. His passing efficiency is an eye-popping 176.0.

The Devils are entering the heart of their schedule with upcoming games at Oregon State and USC but Kelly’s play to this point has been compared to another former ASU quarterback from the state of Idaho: Jake Plummer. “The Snake” burst onto the national scene following the Devils shutout win over Nebraska and eventual birth in the 1997 Rose Bowl where they were seconds away from a perfect season and a national championship.

“I know Jake,” Kelly explained to Cesmat. “Whenever he comes down to Tempe and speaks to the team I’ll stay and talk to him for a good 20-25 minutes. He talks to me about [keeping] focused and [staying] confident. Whenever he’s around and I talk to him it’s a great experience.”

The comparisons to Plummer (the two are very close in stature) started back when Kelly starred at Eagle High School.

“Guys would come up to me,” he said. “Coaches would say, ‘hey, you play just like Jake. The way you run and scramble.”

ASU is hoping Kelly can pull some of Plummer’s big game magic when the Ducks enter Sun Devil Stadium for the nationally televised showdown between the schools atop the Pac-12 South and North, respectively.

Kickoff is set for 6:00 p.m. with television coverage provided by ESPN.

Check back to Pros2Preps.com for more leading up to the game.

ESPN’s Lee Corso on ASU: “They are sleeping giants”