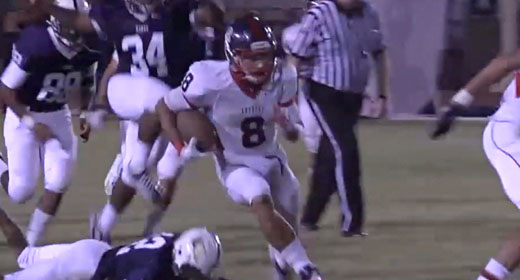 Four years ago when Ironwood Ridge head coach Matt Johnson first got hired, the first thing he did was call Centennial head coach Richard Taylor. He asked for some advice for putting together successful high school football program.

Fast forward to today and now the two are facing off for the Division II state championship game.

“I guess maybe I told coach Johnson a little too much because we went down to Tucson this year and they beat us,” said coach Taylor at the AIA press conference on Tuesday.

These two teams are familiar with one another as they have faced each other in past seasons both in the regular season and in the playoffs. Most recently, these two met on week six this season down in Tucson. The Nighthawks came out on top 28-24.

In the game, two great rushing attacks were on display and a few too many turnovers on both sides. Both those factors will be key once again this time around.

“They gave us pressure and we couldn’t really handle the pressure,” said Centennial senior running back and UCLA commit Jalen Ortiz. “They had a great game plan for us. We just have to come back, re-group and go over the little things.”

The third-seeded Centennial Coyotes are back in the state title game for the sixth time are one of the deepest teams in the state led by one of the Arizona’s best running backs, Ortiz, running behind what he calls the best offensive line in the state.

“They make my job easy,” said Ortiz. “I get all the credit for it and everything but they are down there doing all the dirty work and all I have to do it run.”

“It’s a once in a lifetime opportunity,” said Centennial senior safety Adam Leonard. “I am just thankful to be given this experience and wouldn’t have it any other way than with my teammates in this stage.”

The second-seeded Ironwood Ridge Nighthawks, who are making their first ever state championship appearance, were unbeaten all the way up until the last week of the season. But that loss could have been just what the doctor ordered as they have run through the competition in the post-season to this point. They are led by senior quarterback and defensive back Tyler Williams who has done a little of everything for this team.

“We came up short to Centennial my sophomore year, last year we came up short but now we are finally here this year and we know they are a good opponent,” explained Williams. “It’s going to be a good game.”

“It’s an honor to be here for the first time representing our school and community,” said Ironwood Ridge senior wide receiver and linebacker Jake Matthews. “It’s going to be a good game like it was the first time.”

Centennial and Ironwood Ridge face off for the division II title game on Saturday at 7:00 pm from Sun Devil Stadium.