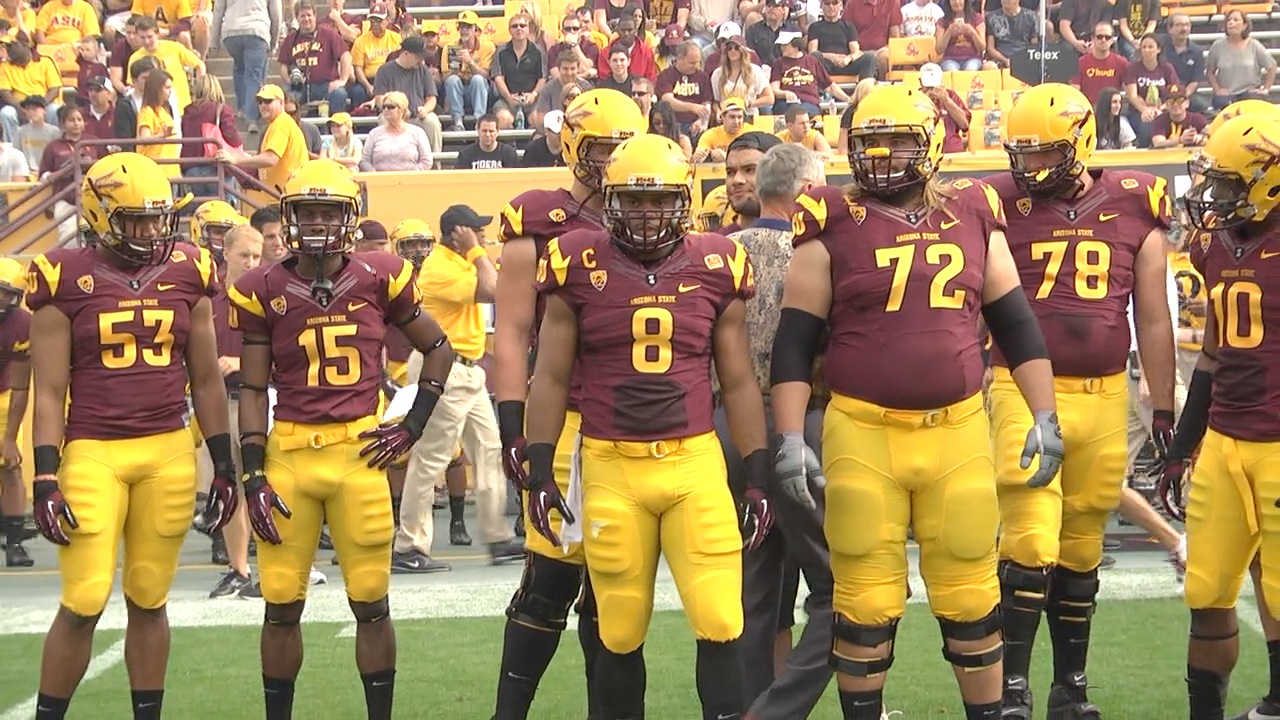 For quarterback Taylor Kelly and the Arizona State Sun Devils it was nice to remember the feeling.

The win also made Todd Graham’s team bowl eligible with one game remaining against arch-rival Arizona Friday night in Tucson.

“We felt good,” Kelly said after the game. “The offensive line did a great job. The receivers got open. It was a great day for the offense.”

The Devils got an early gift from the Cougars when punter Michael Bowlin botched a low snap and the ASU took over at the WSU six on their opening drive. However, three offensive plays netted only one yard and they’d have to settle for a Jon Mora 21-yard field goal just three minutes into the game.

Following another three-and-out, the Sun Devils again started in plus territory and struck quickly. D.J. Foster carried for nine and six yards on the drive moments before Taylor Kelly flipped it to Rashad Ross on a shallow crossing route and he took it in from 15 yards out to cap the eight-play drive. Offensive coordinator Mike Norvell reached into his bag of tricks when Kelly option pitched to Cameron Mashall who bulldozed across the goal line for the two-point conversion making it 11-0 halfway through the first quarter.

The Devils struck again following another three and out when Kelly connected with his favorite target Chris Coyle on a 18-yard scoring strike down the Cougars sideline. The six play drive only took 1:22 and following the PAT ASU led 18-0 late in the first quarter. The Devils out gained the Cougs 187-19 in the quarter picking up 10 first downs compared to just two for WSU. ASU has outscored opponents 124-63 this season in the opening quarter.

ASU continued the onslaught before the half when Kelly threw his third touchdown, this one to Marion Grice out of the backfield on third and long. Grice weaved his way through a host of sloppy tacklers and dove across the goal line from 17 yards out making it 25-0 after Alex Garoutte’s PAT.

Backup Michael Eubank got into the action hooking up with Coyle on the first play following Keelan Johnson’s second interception to put the icing on the cake. Eubank would add a one-yard touchdown run in the second half.

The star of the show was Taylor who completed a school-record 18 consecutive passes finishing 20-23 for 246 yards and four touchdowns. He wasn’t intercepted. The play of both quarterbacks brought praise from Graham.

“Taylor does a great job. I thought he settled down today and played well. I thought Michael Eubank did some good things, as well. I was impressed with how they played.”

Now it’s on to UofA where no motivation will be needed. we know this is the most important game of the year, bar none,” Graham explained. “This game isn’t about Todd Graham or any other coach. It’s far bigger than that. It’s about Arizona State versus Arizona and that’s all it needs to be. I can tell you we know the significance of it and we’re going to work our tails off because we know that’s the most important game.”

Kickoff is set for shortly after 8:00 Friday night.