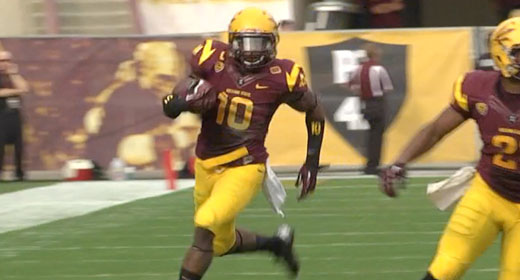 For Keelan Johnson and the other 16 Arizona State seniors Friday night in Tucson represents one last chance.

One final opportunity to beat the school all Sun Devils are trained to loathe when they step foot on campus in Tempe.

UofA (7-4, 4-4) and ASU (6-5, 4-4) have improved under their first-year head coaches and both Rich Rodriguez and Todd Graham have openly expressed how important a win in the annual Territorial Cup is to both programs, their respective fans, and in-state recruits who often have to choose between Wilber the Wildcat and Sparky the Sun Devil.

This game comes down to much more than simply bragging rights.

There is no love lost between Tucson and Tempe and the same can be said for the players.

“Man, I despise UofA,” senior safety Keelan Johnson told Brad Cesmat Monday on ‘Big Guy on Sports.’ “This rivalry is something serious. We just need to get that Territorial Cup back.”

Last year the ‘Cats came to Tempe and stormed back from a third quarter deficit outscoring the Devils in Dennis Erickson’s final Arizona State home game 14-3 in the fourth quarter during the 31-27 win.

Johnson, who had two interceptions in ASU’s Senior Day blowout of Washington State on Saturday, says the trash-talking between the Wildcats players and fans can get nasty.

“There’s so many things that people tell you,” Johnson explained to Cesmat. “You don’t let it get under your skin. Somebody’s thrown a bottle and some other stuff…it’s a sign of disrespect. Nobody likes to be disrespected.”

For fellow senior Brandon Magee, he cherishes the opportunity for one last trip to the Old Pueblo.

“I like playing them in [Tucson] than [Tempe],” he told the assembled media following Saturday’s win over the Cougars. “The looks on their faces in 2010 (a 30-29 overtime ASU victory). Priceless. People don’t forget.”

UofA leads the all-time series 47-37-1 and coincidentally the road team has won the last three meetings.

Kickoff from Arizona Stadium is set for shortly after 8:00 Friday night with television coverage provided by ESPN.