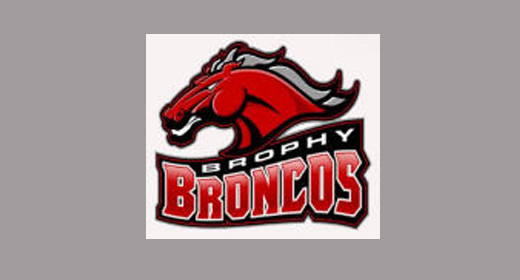 You could tell from the opening quarter this one was going to turn into a defensive coordinator’s worst nightmare just 48 hours after Halloween.

When the smoke finally cleared Friday night at Phoenix College the host fourth-seeded Brophy Broncos escaped with a wild 54-44 win over the the 13th-seeded Chandler Wolves in the opening round of the Division I playoffs.

It was far from a thing of beauty for Scooter Molander’s team who trailed 31-28 at halftime before rallying behind a strong performance from a trio of seniors.

“Chandler is explosive, they’ve got playmakers all over the place,” Molander explained. “I’m proud of our guys for getting turnovers in the second half, that was a huge difference.”

Wide receiver Devon Allen caught five passes for 87 yards, but also contributed 70 more on the ground including a long touchdown. His versatile skill set helped pick up the slack in the backfield after talented running back Marche Dennard (1276 yards and 14 TD’s during the regular season) dressed, but did not play due to injury.

Washington State-commit Tyler Bruggman had a big game completing 20-26 passes for 315 yards and three touchdowns. He also added a one-yard touchdown run. Wideout Clarence Clark had nine grabs for a 195 yards and two scores, one from 34 and the other from 35.

“We knew they could score a lot of points,” Bruggman said after the game. “So we knew we had to match them and put up some points [also].”

Chandler senior quarterback Darell Garretson matched Bruggman in the moonlit air show at Hoye Stadium connecting on 25-31 for 395 yards and four touchdowns. Senior wide receiver Patrick Baldenegro, who is being recruited by a handful of colleges including Air Force, NAU, and Montana finished with five catches for 87 yards.

In a game which featured several lead changes, Brophy forced a key turnover deep in their own territory late in the fourth quarter before flipping field position and eventually running out the clock to punch their ticket to the matchup with fifth-seeded Red Mountain in the quarterfinals at PC next week. The Mountain Lions rolled 12th-seeded Buena 45-6 in Mesa.