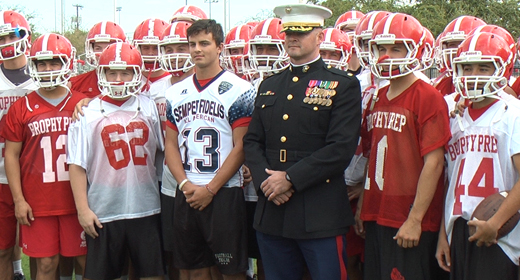 For those that know Devon Allen, you know what kind of talent he is both on the football field and on the track for the Brophy Broncos.

With a young man of Allen’s caliber, it’s a given that the next level schools would be clamoring to get a shot at bringing him to their campuses to be a two-sport student athlete.

But before all that can take place, Allen and his team have to take care of business in the playoffs.

They host Red Mountain tonight, in a rematch of a game they lost to the Mountain Lions 33-31 back on Sept. 7 at Phoenix College.

So, it goes without saying that Allen and the team has their collective minds set for more playoff football, but on Thursday, right before practice, Allen was honored with an invitation to play in the 2nd annual Semper Fidelis All-American Bowl.

One-hundred of the top high school student athletes are chosen to take part in the game, which will take place on January 4, 2013, at the Home Depot Center in Carson, Calif.

The game will be televised on the NFL Network.

Mark McMillian, who is part of the Semper Fi Bowl Committee, says it was a natural fit having Allen take part in this bowl game.

“With the growth of him [Allen], it’s an exciting time for me,” McMillian said.

Allen said he’s been in contact with McMillian for “a while,” and got a chance to attend the Semper Fi combine last year, which really impressed him.

“I thought it was really special, the organization, the Marines, helping out, it was really cool,” Allen said. “It’ll be kind of cool to play against some of the best in the country.”

Just being around Allen for any length of time, you can tell he’s a very humble young man.

This is a young man who helps his family by working an eight-hour shift each and every Sunday at Honey Bear’s BBQ, so he’s not afraid to roll up his sleeves to get things done.

When it comes to the bowl game, Allen maintains his low-key demeanor. He says he’ll do what needs to be done to win.

“I’m not sure what they [coaches] have planned for me yet, but whatever they need me to do to get a chance to win, and get a chance to play, I’m gonna make plays and do what I’ve been doing for the past couple years,” Allen said.

“One of the things [is] that Devon has used God’s gifts very well, not only athletically but academically,” Molander said.

Molander gave credit [as Allen would if you asked him] to the entire team, who he says had a big part in making Allen the special talent he is right now.

“This is a collective award for us,” Molander said. “Devon’s name is on it, as it should be.”

“It’s a great day for Devon and for Brophy football.”