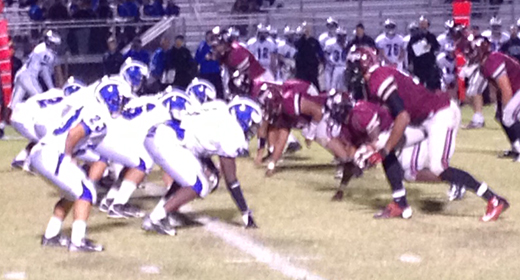 Sometimes your defense is your best offense.

At no point was that more evident than Friday night in east Mesa as the second-seeded Desert Ridge Jaguars survived a scare from the 10th-seeded Westview Knights escaping with a hard-fought 14-7 rain-soaked victory.

“We settled down,” a relieved Desert Ridge head coach Jeremy Hathcock said. “Our defense played their butts off. I’m proud of [them].”

The Knights appeared have the Jags on the ropes holding a 7-6 halftime lead and keeping Desert Ridge’s offense in-check after talented sophomore quarterback Tarek Morrison left in the second quarter with an undisclosed injury and did not return.

The home team finally gained control of the game midway thru the third quarter when running back Danny Siamau broke free up the middle and raced past the Westview for a 53-yard touchdown run on fourth and two. The Jags added the two-point conversion on a quick run play around the end.

Westview continued to fight and kept it a one-score game when safety Kordell Provchy stepped in front of backup quarterback Brendon Smith’s pass near the goal line to end the drive.

In the end Hathcock’s defense was up the challenge stopping the Knights late fourth quarter drive near field when linebacker Amoni Itaaehau tackled running back Seivion Morris two yards short of the first down forcing a change of possession and essentially punching their ticket to the semi-finals.

“Talk about an ugly win,” Hathcock chuckled. “I don’t care, I’ll take it.”

It was a tough loss for the Knights who entered the game brimming with confidence after a 56-20 dribbling last week of seventh-seeded Pinnacle.

“I’m proud of the effort,” Westview head coach Jeff Bowen explained. “They battled for four quarters. Our kids fought. I can’t ask for anything more,”

The Jags will play perennial power Hamilton in the semi’s at Highland High.