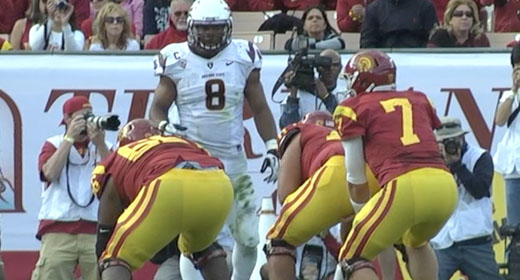 There are plenty of challenges for head coaches in their first season at a program. One of the biggest of all is getting the seniors who have been with another coach, the coach they were recruited by, for three years to buy into your system.

ASU head coach Todd Graham knew that would be a concern coming into his first season. But any concern of that is more than an afterthought as some of the team’s biggest leaders and performers are playing their final season as a Sun Devil.

“It could have not gone as smoothly as its gone,” said Graham at his weekly press conference on Monday. “I have found that these guys have a great love for this University and this program and it means something to them.”

“Yes I was very concerned,” Graham added. “It could have been not as positive of a deal. But I think we did a good job conforming and transforming this team.”

Seniors Brandon Magee, Keelan Johnson, Andrew Sampson and Cameron Marshall were all named captains before the season and have carried themselves on and off the field as such. Magee and Johnson have had their best season’s in a Sun Devil uniform and Graham has continuously praised Deveron Carr and Davon Coleman for their immense improvement over the last year. In fact Graham mentioned Monday that Carr is the most improved player in the program.

All of these players playing in their final season in college could easily be concerned that the coaching staff is more concerned with the future rather than the present. But according to Graham, they didn’t handle things in that manner and the players responded.

“This group is definitely special to me,” mentioned Graham. “I have given them everything I’ve got. Our staff, we’ve worked and that’s been reciprocated on both sides. I think these guys have laid a great foundation for our future.”

Is ASU going to achieve the goal they set out for at the beginning of the season and play for a conference championship? No. But non-seniors like Alden Darby and Evan Finkenberg, along with Graham made it very clear after Saturday’s loss to USC there is still a lot to play for. Especially for the seniors.

“It’s been a tough four weeks but I think that shows what they are really about because their has been no step backward in regard to how they conduct themselves,” Graham mentioned. “I am very proud of this group and were not done yet, obviously. Our focus now is to go get a win and send these guys out winners at this stadium.”

The seniors final game at Sun Devil Stadium is Saturday at 1 pm against the Washington State Cougars.